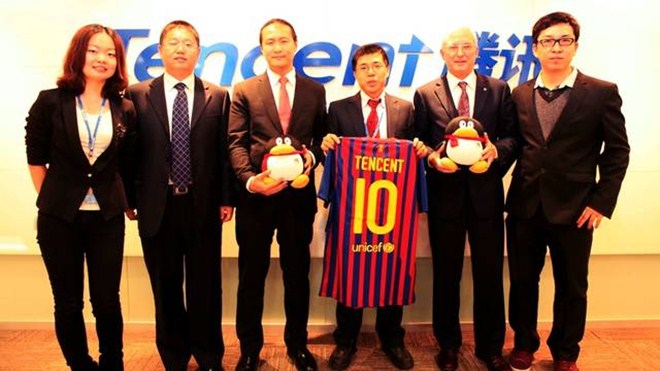 Spanish football giant Barcelona has agreed to a partnership that will see it work with Chinese Internet firm Tencent to increase its marketing activities in China.

The terms of the deal, revealed on Barcelona’s website, see the two organisations come together to build a Chinese version of the football club’s website, while Barcelona will make make use of Tencent’s numerous social media sites to grow its presence and merchandising potential in the country. The club will also work with Tencent to “commercialise applications and mobile games using Barça’s brand”.

Barcelona will begin using Weibo, Tencent’s 250 million strong Twitter-like service, right away and it will look to leverage Tencent’s other social services that include QQ, an instant messaging platform with 900 million registered users, Qzone, a social media site with 500 million users, and Pengyou, its real-name social network that has 130 million users.

The combination of these services is a key step to increasing Barcelona’s visibility in China, according to its Director of New Technology Dídac Lee:

I believe that the best way for FC Barcelona to reach its fans globally is online, especially in China, where we are the preferred Club.

Lee is likely a key driver behind the deal, given that both of his parents are Taiwan-Chinese, although Barcelona already has a link to Tencent’s huge social media empire. Star player Lionel Messi is an established social media star in China, where the Argentina international has more than 14 million people following his Tencent Weibo account.

Tencent has focused on bringing western stars onto its Weibo microblogging platform, its most recent recruit being Portuguese footballer Cristiano Ronaldo, who just so happens to be one of the best players at Barcelona’s great rival Read Madrid.

Reigning European champion Barcelona has strong social media pedigree in western markets where it has established itself on Facebook, where its pages have a combination of 23 million fans, Twitter, where its English, Catalan and Spanish accounts have 4.5 million followers — and YouTube, where its boasts “the largest sports channel in Spain”, according to Barça officials.

Social media is increasingly becoming a key platform for brands to raise awareness and build a presence in China — as many Australian travel firms are doing — and, as one of the world’s most famous clubs, Barcelona is not different in seeking opportunities in the country.

Tencent’s deal with Barcelona is yet another example of a brand seeking to leverage the service for marketing activities in China. This focus on commercial deals and high profile users is one reason that many Chinese Internet users prefer Sina’s Weibo service, which is perceived to be more real.

Update: the club looks to have got off to a promising start after its account (here) attracted more than 50,000 followers in the first 12 hours after launching.

Read next: BitTorrent launches preorders for µTorrent Plus at $24.95 per year