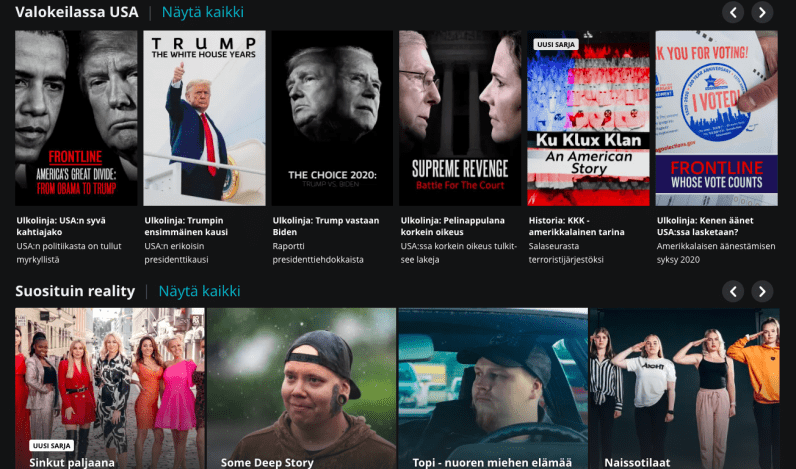 Twenty years ago, Facebook did not exist. Google had just failed to sell itself to Yahoo for $1 million. Netflix was a fledgling startup struggling to establish a working business model around selling and renting DVDs online. Today, Facebook and Google are among the top ten most valuable companies, and Netflix, now the most popular online streaming service with nearly 200 million users worldwide, is worth over $200 billion. Yahoo sold its assets to Verizon for a fraction of Google’s value, and Blockbuster, the video-renting giant that refused to acquire Netflix in 2000, no longer exists.

The internet’s short but rich history shows that surprises can come from where you can least expect them.

The next big thing might come from Finland, where the public broadcaster Yle has been making impressive inroads in online streaming with its Areena service, which is known to 92 percent of the country’s population and used by 78 percent of them, making it more popular than Netflix. The service is free of charge and funded with tax money. According to an annual brand survey by Taloustutkimus Research, YLE Areena is Finland’s number-one internet brand.

What’s behind the success of Yle Areena? How does the company manage to flourish in an era where online streaming is dominated by the likes of Netflix, HBO, and Hulu? If the past is any indication, the companies that move and create new markets do so with good ideas, sound engineering, great product management, strong leadership, and the ability to reinvent and adapt to changes.

In this regard, Yle ticks all the boxes, and its success is supported by its timely and open-minded embracing of data and machine learning, which has allowed it to innovate and rebuild its platform in ways that were previously impossible.

Founded in 2007, Yle Areena was one of the first online video services in Europe. But while streaming giants are challenging local streaming services and broadcasters, Yle has continued to grow. One of the key factors that have contributed to its success is its remarkable ability to personalize the experience of its users. The company developed this capability with the help of an advisory company, Fourkind.

“To maintain its relevance, the media must be capable of reinventing itself quickly and with determination. The pressure to renew itself was also an enormous opportunity for Yle ,” says Elina Huumo, Strategic Design Director at Fourkind. “There are no other options than to understand customers deeply to create unique value for them faster and more effectively. In renewing itself, Yle has recognized that it needs to be more customer-centric and solve how to lead and create offerings in an intelligent way.”

Among the changes Yle has brought to its platform is the implementation of artwork personalization, which uses a machine-learning algorithm to select the best cover image for each video content for each user. This affects not only the bottom line, but increases understanding on what imagery drives content performance for which types of customers.

Many platforms use machine learning algorithms that cluster users based on characteristics and behavior and recommend content that users from the same cluster have viewed. But these machine learning systems often suffer from noisy, biased data, and a bubble effect that reinforces users preferences instead of providing them with novel content. To overcome this obstacle, Fourkind’s experts helped Yle implement a “contextual bandit,” a reinforcement learning algorithm that discovers customer preferences through controlled exploration and feedback. The addition of AI has resulted in a 2.3-percent growth in viewing minutes in Areena.

“On the one hand, this is a simple solution because it affects a small part of the whole experience,” says Jaakko Lempinen, Head of Customer Experience at Yle. “But on the other hand, it tremendously changed how we see the possibilities of using machine learning to create more adaptive user interfaces. It also helped our editorial people to better understand the effects of their work because we started to get completely new data and insights on how different types of images lead to different choices, viewing preferences, etc.”

The Yle Areena team is still in the process of automating the entire content pipeline. They are also testing the use of machine learning to automatically extract suitable cover images from the raw content. “The outcome would be that the contextual bandit algorithm could ‘teach’ the image selection algorithm to always choose the best images from every film,” Lempinen says.

This would create a self-improving loop where the image-selection algorithm constantly learns to pick better images through feedback from the algorithm that analyzes customer behavior and personalizes the experience. Finding more of these self-improving loops is an interesting area Yle will continue to work on.

One of the benefits of a well-designed AI recommendation system is finding areas where the company can outperform the bigger players in the streaming market. Yle might not have the resources of a company such as Netflix, but it has more than 30,000 hours of unique content, most of which is created by the company itself and its collaborators. And being able to connect users with the right content has been very important in maintaining its appeal to the Finnish population.

“We produce and promote a lot of local Finnish content, and at the same time, our recommendation algorithms promote more diverse content for the users,” Lempinen says. “So we are not always looking for the ‘quick fix’ for the recommendations but what kind of content would create more long-term relationships”

While talk of AI adoption is abundant these days, the transition is anything but easy. “Our technical infrastructure and our development culture support AI development very well, but the biggest challenges have come from the people who will work in the end with the systems,” Lempinen says. “And it’s not the people’s fault in any way—complicated AI systems require an even better communication strategy and floor discussions where different parties discuss the functionalities of the system in a shared language. We also need good dashboarding to visualize the different aspects of decision making.”

This is where Fourkind’s specialties helped facilitate the transition. The company’s experts engage with clients in different areas, not only providing guidance and leadership but also helping in the implementation of actual AI solutions.

“Our team consists of an interdisciplinary collaboration among experts in strategic design, data science, and machine learning,” says Jarno Kartela, Principal Machine Learning Partner at Fourkind. “We all have a strong understanding of the value of emergent technology for media transformation and the ability to execute solutions at different levels, from strategic to operative, from data to design.”

In the past two years, Fourkind has worked with Yle in applying different methodologies and testing different hypotheses and scenarios.

“We have supported the efforts of building personalization to the core platform, focusing on both increasing the key targets of the service itself and increasing the understanding of what customers prefer and what content they enjoy,” Kartela says.

And the effort has paid off. This year, Areena surpassed 1 billion video views, which means more than 190 views for every person in Finland.

“I think the biggest benefit and what has helped us grow the most relates to how we understand the insights that machine learning systems can provide, whether it’s about descriptive, predictive or prescriptive analytics,” Lempinen says.

Building for the future

While these are interesting examples of how Yle has managed to integrate artificial intelligence into its platform, it is not the finish line. Yle and Fourkind are working together to solidify a vision in which Yle can rapidly reinvent itself when needed. They will focus on further developing the customer-centric R&D and creative process.

“The keys to success are excellent content and quality of personalized services,” Huumo says. “We have helped Yle to listen to and interact with the Finns so they can understand them deeply, create meaningful content and build a future-proof creative process and tools to build better content and personalized experience and world-class recommendations for everyone.”

“With Fourkind I think we have quite a good partnership where we combine business and service design methods with modern machine learning. This has been quite unique and has worked very well so far for us,” Yle’s Lempinen says.

Yle’s success story provides a glimmer of hope for local companies that want to compete with internet giants at their own game.

This article is brought to you by Fourkind.