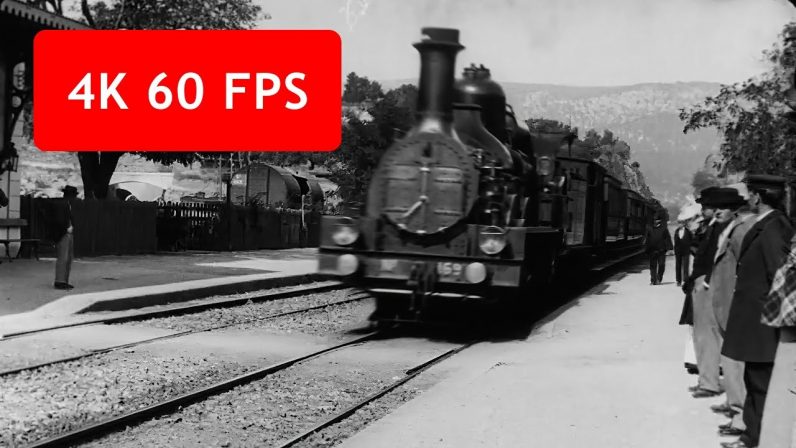 A developer and YouTuber named Denis Shiryaev recently used “several neural networks” to update a famous French short film from 1895 to make it appear as though it were shot on a modern phone.

Called “L’arrivée d’un train en gare de La Ciotat,” the 50-second French short documentary shows a train arriving at Ciotat train station. The film is famous for allegedly causing theater goers at the time to panic out of fear the train would burst through the screen and crash into them. While this tale is largely dismissed as little more than legend, it’s easy to imagine the impact such a visual would have had on someone who’d never seen a motion picture before.

Shiryaev apparently felt the classic masterpiece needed a modern update so they employed what they refer to on Reddit as “several neural networks” to upscale the film to 4K resolution at 60 fps. The result is unbelievable, if not a bit jarring:

The video’s also had sound added, which makes it all the more eerily… normal. It’s unclear exactly what neural networks Shiryaev used, but it’s likely the upscaling was done with GANs (generative adversarial networks) similar to the kind that powers Deepfakes and Nvidia’s FaceGAN.

The 4K version of “Arrival of a Train” may lack the antique appeal of its classic predecessor but, aside from some visible artifacts generated by the AI, it’s an excellent reinterpretation and a testament to the power of GANs to manipulate video.

Experts warn that video manipulation AI could be used for nefarious purposes, but here we just have a really cool use-case where a clever developer’s managed to wow us all.

We’re still trying to reach out to Shiryaev to learn how he managed such a clean upscaling. We’ll update this article if we hear back.

Someone Used Neural Networks To Upscale An 1895 Film To 4K 60 FPS, And The Result Is Really Quite Astounding on Digg

Read next: WhatsApp fixed a bug in its desktop app that allowed access to files on your computer