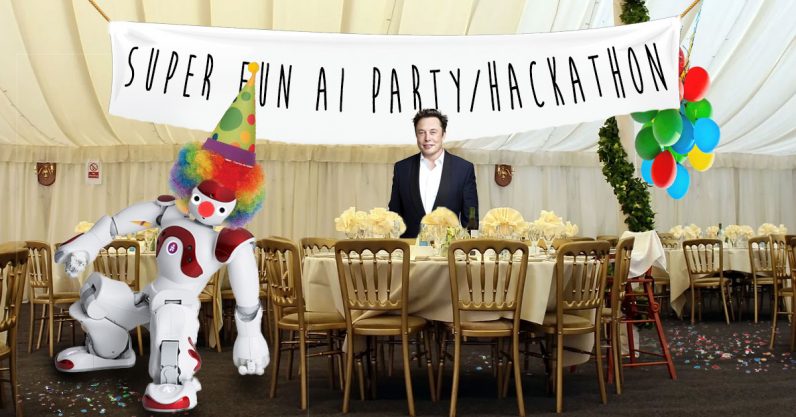 Tesla will hold a super fun AI party/hackathon at my house with the Tesla AI/autopilot team in about four weeks. Invitations going out soon.

This comes on the heels of last week’s fourth quarter earnings call, where Business Insider reports Musk admitted Tesla was at least a “few months” from rolling out “feature complete Full Self Driving” (FSD).

There’s a lot to unpack here, so let’s start with the timing of the party announcement.

Related: Elon Musk’s new song is as bad as his dance moves

Elon Musk told Tesla shareholders last February that the company would have feature complete FSD by the end of 2019.

According to The Verge, Musk told reporters during a call last February that there were few caveats to the release:

Now first of course that this this will need to be supervised by the drivers because it will take us billions of miles to get to the safety level where driver observation is no longer required. And then we will need to convince regulators of this, so there are some steps along the way… But as I said before I’m certain we’ll release full self-driving this year.

Musk back-tracked on his comments in October of 2019 when he was forced to admit Tesla would miss its 2019 deadline. Fast forward to last week’s call and here we are: Elon’s going to throw a good old fashioned hackathon to solve autonomous driving. We assume there will be punch and cake.

Full Self Driving is the name of a Tesla software package that Musk claims will give existing Tesla automobiles the ability to drive from a residential area, onto a highway, and through city streets without any human intervention.

Read: The electric Hummer is real, and it’s as fast as the Cybertruck

In his words, according to Elektrek:

Yeah, feature-complete, I mean, it’s the car able to drive from one’s house to work, most likely without interventions. So it will still be supervised, but it will be able to drive — it will fill in the gap from low-speed autonomy with Summon. You’ve got high-speed autonomy on the highway, and intermediate speed autonomy, which really just means traffic lights and stop signs.

So feature-complete means it’s most likely able to do that without intervention, without human intervention, but it would still be supervised. And I’ve gone through this timeline before several times, but it is often misconstrued that there’s three major levels to autonomy. There’s the car being able to be autonomous, but requiring supervision and intervention at times. That’s feature complete. Then it doesn’t mean like every scenario, everywhere on earth, including every corner case, it just means most of the time.

The goalposts, however, have shifted significantly since Musk made the above statement.

Per the Business Insider report, Musk told reporters on the earnings call that the company’s now aiming for something a little less ambitious:

Feature complete just means it has some chance of going from your home to work, let’s say, with no interventions. It doesn’t mean the features are working well.

It appears as though Musk and Tesla are treating the problem as a computer vision problem. A recent report from Teslarati quotes Musk as explaining:

I think that’s looking like maybe it’s going to be couple of months from now. And what isn’t obvious regarding Autopilot and Full Self-Driving is just how much work has been going into improving the foundational elements of autonomy.</p>

It’s likely that Musk is referring to the problem of labeling objects in the real world – a computer vision challenge. This indicates that Tesla hopes to brute-force its way into city driving by training neural networks to recognize every possible object it could encounter in a city and act accordingly.

One potential flaw in this strategy: things aren’t always what they seem.

Outside of Tesla, the current paradigm for self-driving research involves the inclusion of city infrastructure to support autonomous vehicle technology.

The reason why we can’t currently summon a driverless Uber to drive us around town isn’t because regulators are scared to let the robots loose on our city streets, it’s because the problem can’t be solved with just computer vision and LIDAR.

Then again, as Musk’s legions of fans continue to point out: He’s very smart. Maybe the Tesla AI team just needs a party at Elon’s house to shake loose some eureka algorithms.