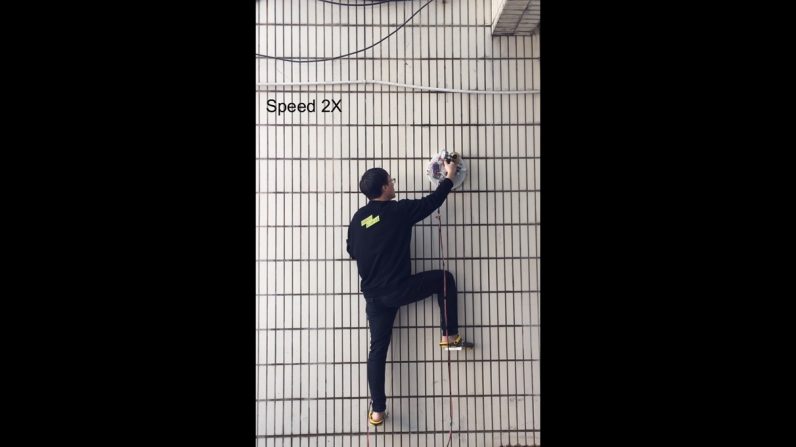 A pair of researchers from Zhejiang University in China have developed a device that allows humans or robots to scale walls like the Amazing Spider-Man.

Researchers Xin Li and Kaige Shi developed a novel vaccuum suction unit capable of gripping rough, uneven surfaces. Until recently, if you wanted to suction-cup your way up a wall it’d have to be made of glass, slick marble, or some other unbroken surface. Standard vaccuum devices rely on an unbroken seal between the atmosphere and the gadget‘s inner-vaccuum in order to maintain suction.

Per the duo’s research paper:

Their most difficult problem is vacuum leakage, which leads to suction failure. Vacuum leakage is traditionally prevented by blocking the flow path between the atmosphere and the vacuum zone, which is difficult for a suction unit working on a rough surface.

The researchers employed what they refer to as the “ZPD method” to overcome the normal vaccuum leakage that prevents these devices from working on rough surfaces. According to their research:

The ZPD suction unit forms a rotating water layer on the periphery of the vacuum zone, and the resulting inertial force generates a steep pressure gradient so that a high vacuum is maintained at the center of the vacuum zone while the pressure at the boundary remains equal to the atmospheric pressure.

In essence, they squirt water towards the edges of the device’s suction cups in order to maintain an even seal in the middle. The result is a water-powered wall-climbing device that’s much more efficient than a pump-operated one:

Experiments showed that a 0.8-kg ZPD suction unit generated a suction force of over 245 N on rough surfaces with a power consumption of less than 400 W. In contrast, a traditional suction unit of the same size would need a vacuum pump consuming several kilowatts and weighing dozens of kilograms to generate a similar suction force because of severe vacuum leakage. The ZPD suction unit was then successfully applied to a robotic arm, wall-climbing robot, and spider-man wall-climbing device.

The obvious implications for this device include wall-climbing robots to perform dangerous cleaning, construction, and rescue missions.

According to an article on Phys.org, the researchers are working on making the device a fully self-contained unit capable of operating on its own:

The next step in this research is to cut down the water consumption. If the water consumption can be reduced, the suction unit will work for a very long time with little water so that the wall-climbing robot could carry its own water instead of being connected to a supply.

Read next: Review: Devialet's Phantom Reactor is the David to your subwoofer's Goliath