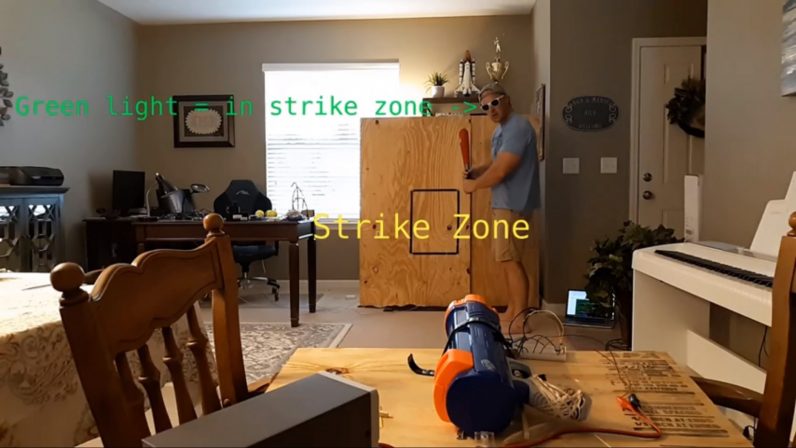 Meet Tipper, a convolutional neural network that lives on an Nvidia AI card. Its creator says it can predict whether a baseball pitch will land inside or outside of the strike zone.

Tipper was developed by Nick Bild, a serial creator who seems to have an unquenchable thirst to create and innovate. He makes apps, trains neural networks, and literally has a gold badge in ‘problem solving’ on HackerRank. He says he was inspired to build Tipper while sitting idle in traffic, pondering the world from an engineer’s point of view.

Here’s how Tipper works, according to Bild’s GitHub page:

A modified Nerf tennis ball launcher is programmatically fired with a solenoid. A 100FPS camera is pointed in the direction of the launcher and captures two successive images of the ball early in flight.

A convolutional neural network running on an NVIDIA Jetson AGX Xavier rapidly classifies these images against a model that was built during the training phase of the project. If the images are classified as in the strike zone, a green LED on a pair of glasses (in the wearer’s peripheral vision) is lit. Conversely, if the ball is predicted to be out of the strike zone, a red LED is lit.

Bild told us that he thinks Tipper could be used for good, he envisions a use-case where the AI helps batters get better:

I see the main use case as a training aid for batters, to help them recognize a good pitch as early as possible. With some tweaks, it could also be trained to watch the pitcher rather than the ball. In this way, Tipper could be used to alert pitchers if they are inadvertently tipping the batter with body language.

But he also told us he thinks there might already be something like Tipper in the wild. Something being used for nefarious purposes:

There’s also a white elephant in the room — it could be used by a batter covertly during a game to gain an unfair advantage.

After having built this by myself in a few weeks time, with a very small budget, I can’t help but wonder if a similar device already exists and is in use. A tiny pinhole camera somewhere in the ballpark pointed at the pitcher’s mound and a buzzer fully embedded in the sole of a shoe is all that would be needed.

It would be interesting to do an analysis of batting statistics to see if there is a team where batters, on average, perform better than they have throughout their careers on other teams. Such a find would raise suspicion.

Tipper may seem innocuous enough when it’s spitting Nerf balls out, but the real concern with this particular AI is the conundrum it represents. If a good-faith developer can backdoor their way into a performance-enhancing AI while building a training aid, what are the bad-faith developers capable of?

Hang on to your hats sports fans, AI may be more of a literal game-changer than any of us imagined.

Read next: Pro baseball league uses AI umpire for the first time, coach gets ejected for arguing with it

Read next: Amazon launches a portable Echo speaker for India