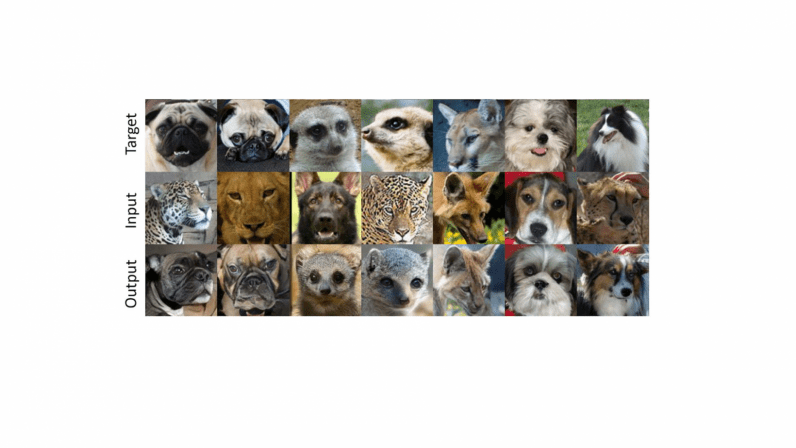 NVIDIA, the company behind some of the most impressive graphics cards, has pulled off yet another machine learning-powered wizardry.

Researchers from the Santa Clara-based chipmaker have created a new AI tool — dubbed Ganimal — that can take in a picture of an animal and recreate its facial expression and pose on the face of any other creature.

In a paper — titled “Few-Shot Unsupervised Image-to-Image Translation” aka FUNIT — the image-to-image translation method leverages generative adversarial networks (GANs), a neural network that has been widely adopted in a variety of image generation and transfer scenarios.

You can give the tool a spin right here and read the technical aspects of the research here.

“In this case, we train a network to jointly solve many translation tasks where each task is about translating a random source animal to a random target animal by leveraging a few example images of the target animal,” Ming-Yu Liu, the lead computer vision researcher behind FUNIT, said.

By drawing inspiration from human mind to generalize, the idea is to transform images from one domain to another using relatively small image datasets. Then the model is introduced to never-before-seen samples in order to translate an input image from the training set into one that resembles images in this new class.

It’s worth noting that NVIDIA has previously made use of GANs to generate hyper-realistic human faces, turn cats to tigers, and even transform MS Paint-style doodles into photorealistic pieces of art.

The silicon giant plans to report the results of the work at the International Conference on Computer Vision (ICCV) in Seoul this week.