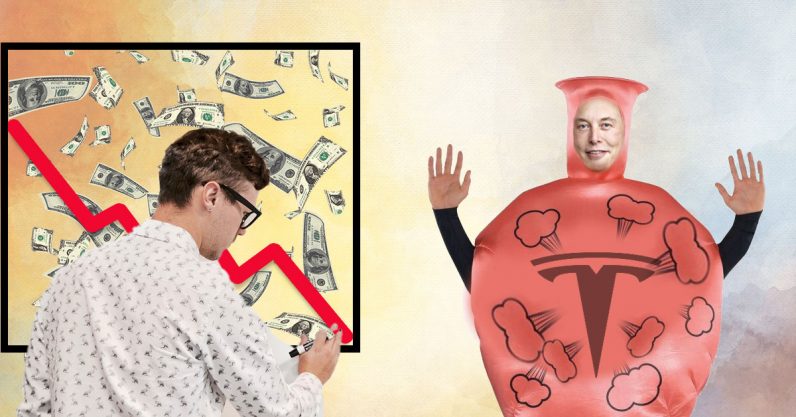 Scott Galloway, a professor of marketing at NYU’s Stern school of business, just announced a list of companies he’s convinced are about to experience a severe downturn. Among them: We Work, Lyft, Robinhood, OYO, and Tesla.

While the first four may not be huge shockers, adding Tesla to the list looks a bit controversial given the company’s record-setting pace in Q3. But, if you look a little closer, things beneath the surface don’t appear so tranquil.

A leaked email obtained by Elektrek indicated the company was on pace to deliver more than 100,000 cars in Q3, which would be a record. Unfortunately for Musk and co., this milestone comes at the expense of profitability. According to a report from The Motley Fool:

Tesla will probably report another sizable loss for the third quarter, even excluding stock-based compensation, which is a massive expense in itself. Normal-course cost reductions may enable Tesla to reduce its losses over time, but they don’t represent a path to sustainable profitability.

Galloway’s prediction appears based on similar logic. Here’s the Tesla-relevant snippet from his blog:

Dear Twitter trolls: yes … I’m an idiot, I can’t do, so I teach, and I don’t understand genius. It’s a tech/energy play. I get it… Save your breath. Yes, he is a genius, Tesla has changed the world for the better (I believe this). And … Tesla doesn’t have the scale to compete in a well-run, low-margin business — auto.

While anyone who’s written about Elon Musk with a.. shall we say, ‘less than positive’ spin, can empathize with Galloway’s tongue-in-cheek defensiveness, his simple point is that Tesla doesn’t appear to have a viable plan to become profitable. Despite promises about advances in batteries and cutting marginal costs from third-party parts providers, there’s little reason to believe Tesla can brute-force its way into the black.

The company’s current big claim to the future is Musk’s promise that Tesla will field a million fully autonomous ‘robotaxis’ sometime before the end of 2020. Experts in the fields of artificial intelligence and robotics say this claim is ridiculous. Rodney Brooks and Kai Fu Lee, for example, said they’ll eat all one million of those cars if that happens.

It’s safe to assume that Tesla would have no trouble turning a profit if it were to invent, develop, manufacture, and field one million fully-autonomous robotaxis by the end of 2020. But, considering that the number of driverless cars capable of level five autonomy in existence is currently zero, it’s unlikely Brooks and Lee will lose their bet.

Galloway says Tesla will either disappear or lose eighty percent of its value. According to him, “The unicorn barn is on fire. Ablaze.” And, in truest form, Musk‘s making fart noises in the inferno’s general direction:

To be more specific, Musk announced on Twitter over the weekend that Tesla owners will soon be able to customize their vehicle’s running and horn sounds. Among the options, of course, is a fart sound.

Read next: iPhone repairs could become much cheaper thanks to these laser machines