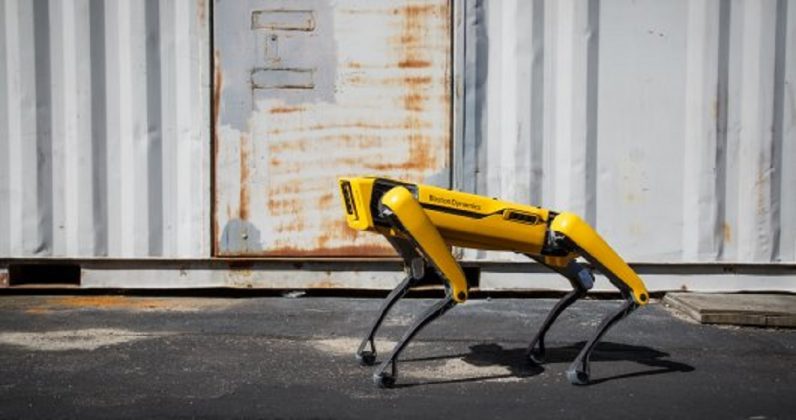 Boston Dynamics today launched its first commercial robot. Well, sort of. A select list of developers will be given the opportunity to lease one or more of the company’s ‘Spot’ units as part of an ongoing development plan.

While that means you can’t purchase your own 4-legged robot to keep as a pet (this thing is not designed to interact with humans in the wild), it also means the era of robot co-workers has truly begun.

Unlike traditional automation systems and most industrial robotics, Spot isn’t an autonomous machine. It’s as dumb as a toaster, albeit a toaster that can easily climb over a mountain of human bones to track you down and ‘assimilate’ you into the grand AI scheme – if a developer were so inclined to create the necessary routines.

Spot’s real claim to fame is its ability to traverse difficult-to-navigate terrain such as loose rocks, stairs, grass, and dangerous worksites. In the official launch video, the mechanical quadruped shows off its business chops:

We see it carrying a cinder block, operating outdoors during a dark and stormy night, and patrolling job sites, but what we’re not privy to is details like cost and availability. According to a report from Wired, it’ll cost “about the price of a car,” more depending on how many units and what modules the developers need.

In order to enter into a lease, developers must also meet with Boston Dynamics staff to ensure they’ve got the right idea. Spot isn’t a pet or a toy. It’s also not a 4-legged version of a robot vacuum cleaner: it doesn’t wander around looking for things to do. It’s a robot that requires a human operator to train it, and then an advanced set of protocols to direct its activities afterwards.

Spot’s launch may not herald the era of the family robot or full-service robot butler, but it’s a pretty big deal. The obvious applications for a programmable machine that can wander around in the real world like a mechanical mammal include bomb disposal, hazardous chemical detection, and rescue missions. But Spot could become an instant game-changer anywhere humans currently perform mundane tasks such as hand-delivering messages or conducting environmental assessments.

And if replacing us in the business world doesn’t work out, Spot’s already secured a spot with Cirque Du Soleil where it’ll try its luck as an entertainer.

One thing’s for sure: Despite how incredible Spot’s capabilities currently are, Boston Dynamics has barely scratched the surface. We’re in the “Pong” generation of commercial robots, imagine what happens when developers begin to imbue machines like Spot with advanced neural network architecture or AI cloud connectivity.

In other Boston Dynamics news, the company’s bipedal ‘Atlas’ robot has learned a new gymnastics routine. Imagine this thing with glowing red eyes, hunting you down through the streets of New York City as panicked people scream all around you:

Read next: The Juiced Scorpion is a moped-like e-bike with buttery-smooth suspension