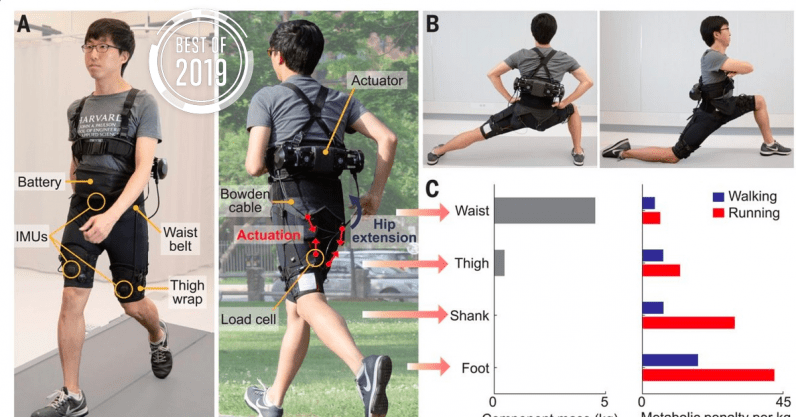 A team of researchers recently developed a robotic exosuit that makes it easier to walk or run long distances. It could imbue average people with superhuman walking abilities, aid the disabled, and help soldiers on long marches. And this is just the beginning.

The research was conducted by scientists from Harvard, Chung-Ang University in South Korea, and the University of Nebraska Omaha. It involved the creation and development of an AI-powered soft robotics system designed to be worn as an exosuit. It works by assisting your movements with robotics, thus lowering the metabolic load – how much energy you have to spend to do something – it takes for walking and running.

According the team’s research paper:

We show that a portable exosuit that assists hip extension can reduce the metabolic rate of treadmill walking at 1.5 meters per second by 9.3% and that of running at 2.5 meters per second by 4.0% compared with locomotion without the exosuit. These reduction magnitudes are comparable to the effects of taking off 7.4 and 5.7 kilograms during walking and running, respectively, and are in a range that has shown meaningful athletic performance changes.

The exosuit uses artificial intelligence to determine the most effective way to assist with the wearer’s motions. It takes into account trajectory, velocity, and gait so that it can function without impeding or hindering the user’s natural motions. Apparently it works exceedingly well in this respect.

One of the researchers on the project, Harvard robotics engineer David Perry, told Scientific American:

After wearing the system for 15 minutes or so, you start to question if it’s really helping at all, because you just feel like you’re walking. Once you shut it off, however, your legs suddenly feel heavy, and you realize how much it was helping. It’s a lot like stepping off the end of one of those moving sidewalks at the airport.

Here’s a trimmed video from the team’s research:

The researchers received major funding from DARPA, the Pentagon’s military think-tank, so it follows that this design is engineered to help soldiers on long marches. However the implications for this device could be nearly universal when it comes to mobility applications.

One fan of the team’s project is neuromechanics expert Jose L. Pons. He wrote up an independent research paper expressing his regard that this technology is part of a representative turning point for wearables. He posits that brain computer interfaces – like the ones Elon Musk’s Neuralink is working on – or in this case brain bionics interfaces, will take these soft robotic wearables into the next generation within a matter of “several years.”

The reason for this is that current AI-assisted mobility technology is reactive. The algorithms have to determine your intent and react to your motion after you’ve already started moving. With a brain-robot interface, the AI could interpret your intent to move as soon as you think it and transmit that to a robotics device. Full-on cyborgs y’all.

Pons, in his paper, posits:

The need for preserving human neuromechanics while using assistive technology will likely lead to implantable and networked recording and stimulation neuroprostheses. Such devices would implement effective interfaces to decode the wearer’s movement intent and influence it when necessary to enhance human performance.

For our money: this is the future of sports. Fire all those back up players and make the starters wear exosuits. Timeouts? Who needs timeouts? Get out there and run your half-robot asses off, athletes.