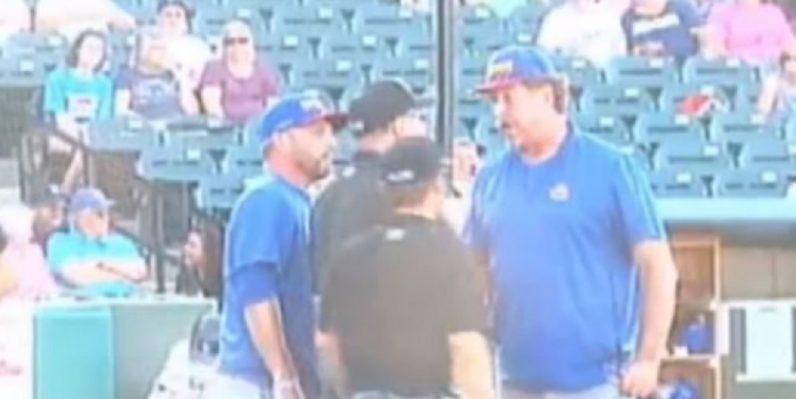 You’re outta here! Professional baseball‘s first AI umpire – in the form of an automated strike zone – didn’t take long to chalk up its first ejection after 1988 Cy Young winner and current pitching coach of the Atlantic League’s Highpoint Rockers, Frank Viola Jr., was tossed for his profanity-laced disagreement with the machine’s ruling.

The Rockers and the Atlantic League are an independent baseball league not directly affiliated with Major Leage Baseball, but the new AI systems in use are part of a partnership between the two. As part of a three-year deal, the Atlantic League’s players and coaches are playing the role of guinea pigs for MLB in order to see if automated systems are right for prime time sports.

The automated strike zone, developed by TrackMan, caused a kerfuffle in the first inning when Ryan Dent, a batter for the rival York Revolution, walked on one strike and four balls – three of which actually painted the outside of the strike zone, making them viable candidates for a strike call.

In situations like this human umpires have the authority to supersede the computer’s ruling, but umpire Tim Detweiler made no such call. This sparked Viola to express his frustration, at first yelling “do your fucking job” before charging out of the dugout where he was intercepted by the third and first base coaches. Apparently his demeanor and language were enough to merit the toss from Detweiler.

Baseball‘s been around far longer than modern computers and artificial intelligence, and humanity’s ability (or lack of ability) to discern a strike from a ball has been the crux of more ejections than just about any other single factor in professional sports. Handing those duties over to a computer seems like a smart idea, but players and coaches haven’t responded as positively to the new system as its developers might have liked.

1st time use of trackman with @RockersBaseball at York tonight. Got myself tossed in the 1st. Problem was was it trackman, or was it human strike zone?! That was problem. Who or what was in charge?? Major problem. Let each team know at all times what’s going on…

Eventually, it’s likely we’ll see these systems become more robust – after all, it was the TrackMan AI’s first day on the job – but for now they seem problematic for players used to relying on a centuries-old system built on old-fashioned human eyeballing.

Until that happens, however, we’re with Frank on this one. It sure seems like the AI got it wrong and robbed the Rockers of an earned strikeout. Maybe the baseball world should consider using this tech in college or semi-pro leagues until such a time as it’s ready for The Show.

Trackman idea is sound. Get the kinks out before you put in play. Is that asking too much?? You’re messing with kid’s careers…..

At the end of the day, AI might not be coming for everyone’s jobs but it’s clearly going to replace some human umpires and refs in sports – people who should have a vested interest in calling it out when it doesn’t get things quite right. It’s a bit mind-boggling to see an ump just kick back and let the AI make the calls. Technology’s great, but seeing someone get walked on AI-called strikes is enough to make any sports fan pine for yesteryear.

Read next: How to send uncompressed images on WhatsApp