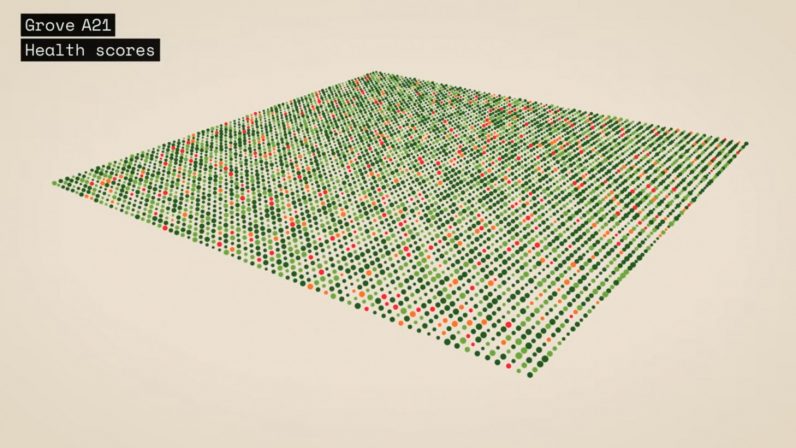 It’s estimated that 100 percent of citrus trees over three-years-old in the state of Florida have an incurable, deadly disease. They will wither and die within the next few years. California’s orchards are next.

Thankfully, we have a new ally in the fight to save the citrus industry: artificial intelligence.

While scientists race to create disease-resistant trees, politicians and activists argue over where we should draw the line with pesticide use. The net result of these efforts may yield optimism for the future, but it shows little hope for farmers today.

AI, on the other hand, helps growers protect their crops right now.

By the time farmers find out their trees are infected, the best course of action is often to destroy the farm and sell it for real-estate. And a tiny tree-louse called the Asian citrus psyllid is to blame.

In the US it’s called “citrus greening disease” and it’s cost growers in Florida an estimated $7 billion in revenue. Now hundreds of trees with HLB have been found in California.

One of the biggest problems farmers face in dealing with HLB is detection. When a single tree is found with the disease, growers immediately remove it in hopes of saving the surrounding trees.

Detecting HLB is something that occurs on a tree-by-tree basis. That means if you have three grapefruit trees in your backyard, you need to go check each one. The problem gets a bit out of hand when you have an orchard with more trees than you can check.

TNW spoke with Barak Hachamov, co-founder and chairman of an AI startup called SeeTree about his company’s mission to build “intelligence networks for trees.” He said:

SeeTree uses military-grade drones, computer vision, and “boots on the ground,” to create a profile for each individual tree in an orchard.

Hachamov told us it’s the combination of AI and people that makes SeeTree’s solution unique. “We quickly figured out there’s no silver-bullet sensor out there,” he said. This means that farmers need a way to get eyes on their plants – and drones with computer vision-enabled cameras are a great way to do that.

SeeTree uses drones, sensors, and humans to capture images and record data that AI can parse for information. The result is a detailed analysis of each individual tree in an orchard with a crop-yield analysis and health profile.

If your trees are under-performing, SeeTree’s system will inform you and you can do something about it. The same goes for detecting diseased trees in an orchard before there’s an epidemic.

Farmers are basically blind to their production units. Today, farming is based on a lot of gut feelings because farmers cannot see every tree. Without data you cannot begin to even dream about optimization.

If AI-powered solutions such as SeeTree’s hybrid system can give farmers at-a-glance insights coupled with health alerts, that data could translate to better crop-yield forecasting and early HLB-detection in orchards.

The lessons learned from a decade of devastation to Florida’s citrus industry came the hard way, but there is good news. Nutrition programs combined with “disease tolerant” rootstocks have effectively saved the citrus tree in Texas. And researchers all over are hopeful a disease-resistant rootstock can be developed.

But, for Florida’s citrus farmers, it’s too little too late. And California‘s woes have just begun. Until a resistant crop or cure can be developed, growers need all the data and insight they can get to keep their orchards safe.