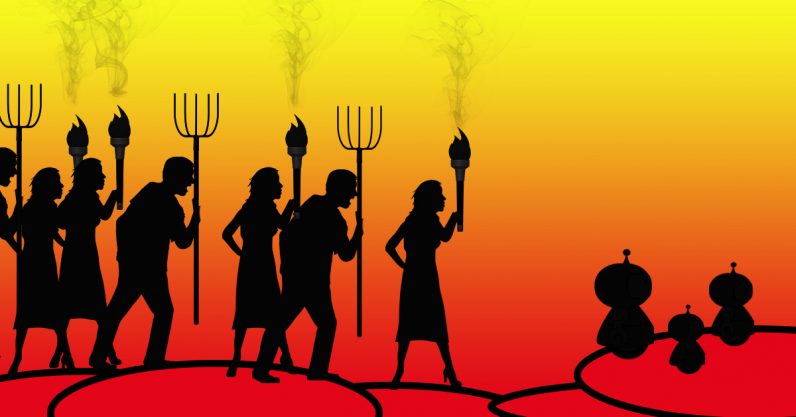 The average consumer probably doesn’t know a whole lot about self-driving car technology. But, when exposed to it, most people seem to react with a mixture of caution and optimism. Not everyone likes change though. Nobody understands that more than Waymo’s human drivers.

Waymo, a Google sister-company, found the perfect testing ground for its self-driving taxi program in Arizona. The weather’s perfect and the local government is amenable.

But, for some Arizona locals, the home of the Grand Canyon has become an uncanny valley they can’t abide. The idea of driverless vehicles occupying the same roads as them, their families, and the general public is too much for them to accept.

One Arizonan, from the city of Chandler, became so fed up with the sight of Waymo‘s vans in his neighborhood that he stood on his lawn pointing a pistol at the human safety driver inside of one as it passed his home. He told police he wanted the person in the car to be afraid, presumably to send the message that self-driving cars aren’t welcome.

He’s one of dozens of citizens (on record) who’ve engaged in wildly dangerous acts provoked by, apparently, nothing more than the idea of a car driving itself.

People have thrown rocks at Waymos. The tire on one was slashed while it was stopped in traffic. The vehicles have been yelled at, chased and one Jeep was responsible for forcing the vans off roads six times.

TNW reported, earlier this year, that citizens in California were rising up against the machines. In two of six accidents involving self-driving vehicles, the DMV noted that people intentionally caused the collisions.

In both of those cases the drivers then exited their vehicles and screamed at the driverless cars in an apparent fit of rage. In one case a woman slapped the autonomous vehicle.

But, comparatively, California only dabbles in self-driving cars. In Arizona, residents in some cities have become alarmed at the number of autonomous vehicles they see on public roadways. In fairness, for many of these folks even a single robot-driven car is too many.

Why are people so angry at self-driving cars? After all, none of the reported incidents we’ve seen indicate the people attacking machines and harassing their human safety drivers are experiencing road rage. It doesn’t appear as though anyone got cut off by a robot, or got tailgated, or had one sitting at a green light in front of them.

It seems the existential threat that driverless cars represent is the sole catalyst for these outbursts.

The person who aimed a pistol at a Waymo driver expressed outrage that the company would send its vehicles into his neighborhood when police questioned him. He pointed out that an Uber-owned self-driving car had “killed someone.”

He’s right, a pedestrian was killed when an autonomous vehicle developed and operated by Uber struck them as they crossed a street. It’s since been shown that the human driving the vehicle likely wouldn’t have been able to react quickly enough to avoid the collision.

That means the problem wasn’t that a human should have been driving; it’s that the computer wasn’t any better than a human would have been in this particular case.

But, that being said, Uber was also warned in a safety report that something like that could happen. And it chose to continue with its self-driving car program without fully addressing the issue. There’s several layers to the story, and none if it directly relates to what Waymo is doing in Arizona.

Pointing a gun at a Waymo driver because a driverless car killed someone in Pittsburgh is like yelling at Google CEO Sundar Pichai because your granddaughter’s iPhone doesn’t do what you want it to do.

People often don’t even know which machines they should rage against or why, so the closest one makes as good a target as any.

This is a huge problem for emerging technology. It’s been a while since something as radical as a car that can drive itself was shoved into the public periphery. And a lot of people just don’t know what to think.

It doesn’t help that celebrities such as Elon Musk make it incredibly difficult for the average person to understand the differences between autonomous and semi-autonomous vehicles.

Let’s see how well this tweet from @elonmusk ages. https://t.co/ShX1CWW86j

It’s no wonder some members of the public have no idea what to expect when they see dozens of cars driving through their city streets with “Waymo” logos all over them.

Caught in the middle of all of this, at least in Arizona, are the employees of Waymo. So far, to the best of our knowledge, nobody working for Waymo has been seriously injured in any of the incidents in Arizona between angry members of the public and its vehicles.

Yet, if the knowledge gap between the reality of self-driving cars and public awareness isn’t addressed soon, we fear that may change.