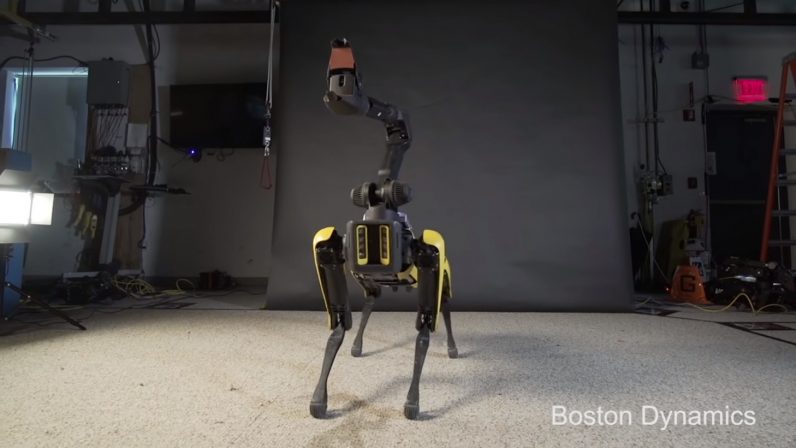 In the video, released yesterday, the robot gets funky to none other than Bruno Mars. Hopefully this indicates our AI overlords will spare the soulful crooner – after all, he’d catch a grenade for you.

Here’s the video, we bet you can’t make it through without imagining the robot leaping through the screen and grabbing you. It’d probably do that thing that dogs do when they whip their heads back and forth like a shark trying to rend-free the meaty part of a dolphin. Anyway, enjoy:

What. An. Adorable. Robot.

You gotta love the moves, and the creepy way it stares directly at you while it shakes its robot booty. Honestly, I’d rather watch this thing dance than the aforementioned Bruno Mars, no offense. But we’ll hold off on ordering a custom blinged-out TNW version until it can get down like Bill Gates:

In all seriousness, Spot’s movements are becoming scarier (read: more natural) by the update. We’ve seen the company’s other robot, Atlas, do some flat-out amazing things such as nail a back-flip and parkour. But it’s somehow creepier when the machine looks less humanoid.

Suffice to say that Spot, like the commonly occurring giraffe-murder-dog-snake-puma of nature, has a unique style of movement. This makes it equally-suited for protecting the gates of Hell alongside Cerberus, or doing the running man better than you ever did. No matter how many hours you stood in front of the mirror practicing. Stupid robots.

Read next: Hitman 2 announces the oft-killed Sean Bean as a contract target