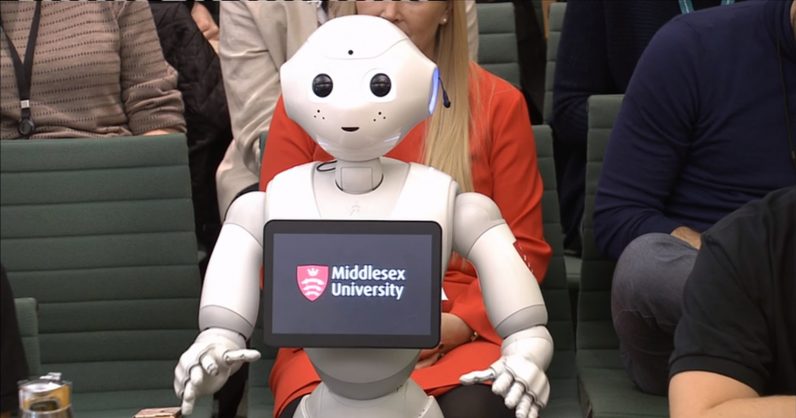 The UK’s Parliament recently decided to question an actual robot about artificial intelligence. This might sound like a good idea on paper, but considering there aren’t any sentient robots, it’s a lot like asking a toaster oven to testify on the State’s nutrition program.

The robot, a Pepper model from Softbanks Robotics, was trotted out before Parliament by handlers from Middlesex University. It then performed a puppetry show, under the guise of ‘providing evidence,’ with Labour MP James Frith.

Pepper began, “Good morning, thank you for inviting me to give evidence today.” But, of course, none of this was sincere. The questions and answers were written out ahead of time, making the entire endeavor little more than a staged play between Parliament and a piece of plastic.

Maybe this was classic British comedy at its finest – those of us on the other side of the pond are only just getting access to “Monty Python’s Flying Circus,” on Netflix this month so we’re still catching up.

But, cultural differences aside, there’s nothing clever about the UK purposely misleading the general public concerning the capabilities of AI.

Let’s be clear here: Pepper isn’t an advanced robot capable of thinking, feeling, or experiencing anything even remotely akin to the human condition. It’s no more human than Amazon’s Alexa or the Google Assistant.

This time, however, the offense seems a bit less egregious, but only by comparison to Saudi Arabia’s record concerning human rights. It’s still a big deal.

Experts in the field of deep learning believe that misinformation surrounding the actual capabilities of AI could lead to an “AI winter,” or period where research shrivels up and dies due to a lack of funding and public interest. Furthermore, ignorance in the general population could easily lead to distrust of future technologies resulting in stagnation across the entire field of machine learning.

But, at least the MPs had a good time pretending to accept evidence from a robot. In fact, Tory MP Lucy Allen went so far as to quip Pepper was “better than some of the ministers we’ve had before us.”

Robots like Pepper truly represent a future where human burdens are eased by mechanical servants, companions, and helpers. But, in order to get there, we need to be careful how we allow this technology to be represented. Robots aren’t people, no matter how much fun it might be to pretend they are.

If Parliament wants to understand the impact that AI might have, it should simply turn to its appointed adviser, Deep Mind’s Demis Hassabis. He’s one of the world’s leading experts on the subject and certainly far more qualified to answer MP’s questions than a glorified gadget.