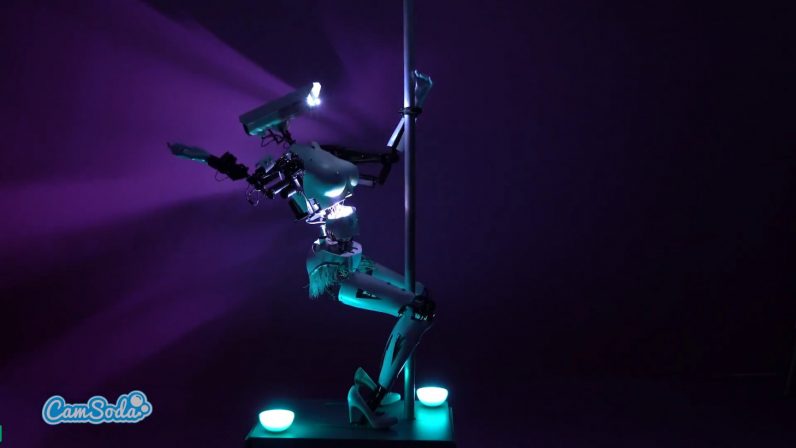 You can pay his art to talk dirty to you online while it gyrates, live and on-demand, for tips. Cardi-Bot, as its called, currently works in the employ of CamSoda – one of the world’s most popular live “sex cam” websites.

As a quick side-note: Cardi-Bot is an unfortunate name. Intentional or not, it conjures comparisons to the rapper. And that doesn’t seem fair to either of them.

Walker’s creation created a media stir in January at the Computer Electronics Show (CES) in Las Vegas. A video of it doing its thing went viral on social media – the typical hilarity and hysteria surrounding AI ensued.

Them robots comin for EVERYBODY job pic.twitter.com/sHYVt88Zta

This, the internet seemed to agree, was as good a sign as any that no job would be safe from the impending automation revolution. But would people really desire a robot in the same way as a human?

At the time, it was easy to imagine some enterprising adult entertainment establishment employing the robot as a marketing ploy. Such a plan relies on nothing more than getting people through the door to watch a show – and the drink minimum and constant sales pitches tend to do the rest.

The “sex cam” scene, on the other hand, wouldn’t seem to lend itself to the novelty quite as well. Part of the allure of webcam models is the live connection – users and models chat with one another during performances. Many models have dedicated followings who make up a community of people who are equal parts fan and client.

The same could be said for stage performers, but there’s a certain level of privacy and intimacy that people engaging with web models have. Clients are usually in the comfort of their own home and performers often are as well.

Cardi-Bot’s clients on CamSoda also have some form of interactivity, they can currently chat with the robot and request certain actions through the site’s interface. But any emotional connection is entirely one-sided.

Not to burst anyone’s bubble, but the machine they’re watching isn’t even powered by the natural language processing AI that they’re chatting with. They are separate machines. It’s like watching a model perform while another person pretends to be them in chat. Only, in this case, one’s a puppet and the other is (presumably) a neural network.

This, obviously, isn’t a trick on CamSoda or Walker’s part. It would be silly to think the actual robot was talking to you and not an algorithm on a computer, and CamSoda certainly isn’t leading anyone to believe otherwise.

But, we do have some genuine curiosity concerning the users who have tipped Cardi-Bot. A quick glance at the robot’s page on CamSoda will show you that at least one person did the digital equivalent of tossing some cash on the stage (if you’re the tipper, we’d love to talk to you).

It’s impossible to tell if, a decade from now, we’ll see the proliferation of robots in the sex industry. Alarmists warn of a world where sex robots (which, currently, are nothing more than “sex dolls” with a dirty-talking virtual assistant built in) serve as a surrogate for human contact.

But the current trend doesn’t indicate people are in a hurry to have casual sex with robots (any startups out there working on the Uber of sex robots, we want to talk to you too). It seems like, aside from simple curiosity, people just want to connect with another being. Maybe Cardi-Bot is the genesis of a new burlesque or just another flavor of erotica for those who like their entertainment a bit naughty.

For his part, Walker doesn’t seem particularly proud of what his creation has become. He spoke to ReCode in January about renting out his robots for performances, saying:

I didn’t build these to get involved in the sex industry. They weren’t about sex, they were about voyeurism. I’ve been dragged into this side of things unintentionally, but I’m not complaining. It does pay the bills. I am a robot pimp in that way.

The robot is obviously still a statement on voyeurism – whether it’s still art or not might be the more interesting question.

Read next: Apple doesn't think you deserve a $9 headphone dongle with your $1000 iPhone