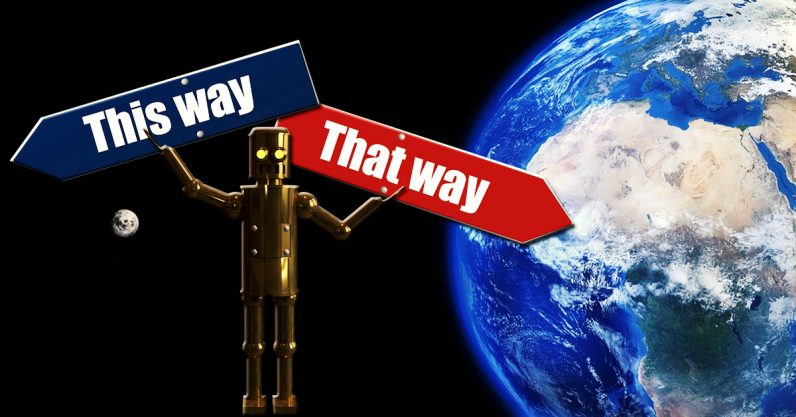 There’s no GPS in outer space. If people get lost on the Moon, or on the way to Mars they’re pretty much screwed. NASA and Intel want to keep that from happening, so they’ve turned to AI for solutions.

The event covered the search for exoplanets, sending a probe to observe the sun up close, and other topics of interest to present and future spacefarers. Two presentations in particular focused on the problem of extraterrestrial navigation for both humans and robots, and how we’re finally able to address them with today’s deep learning techniques.

The first dealt with the problem of localization on the Moon. It’s relatively easy to figure out where you are on Earth. We can use an old-fashioned map, an app, GPS, search for visual landmarks, walk in one direction until we hit water, or simply ask someone for directions. It’s different on the Moon where, at the surface level, everything looks like this:

So how can AI help? Researchers Andrew Chung, Philippe Ludivig, Ross Potter, and Benjamin Wu developed a system for simulating the Moon’s surface and comparing the simulation to a local enviroment. In essence, they teach an AI what the moon looks like by feeding it millions of images and then use a neural network to create a virtual moon.

In theory, a person standing on the Moon’s surface should be able to localize by taking pictures of their surroundings and having the AI compare the real images with the simulation.

This AI-powered solution should work for any surface we’re able to take images of – including Mars. It likely won’t have the same efficacy for open space localization, but flying through space presents a different challenge than navigating an alien surface.

The next team to present was another Intel-sponsored group working on a problem many of our readers are already familiar with: Base-building on another planet (or the Moon, in this case).

Yes, ‘StarCraft’ aficionados and old school ‘Command and Conquer’ lovers: NASA is working on autonomous base construction, mining, and resource management for Lunar and Martian colonies. And it couldn’t be done without machine learning.

The team, consisting of researchers Drew Bischel, Zahi Kakish, Francisco Lera, and Ana Mosquera, set out to approach the problem of getting driverless vehicles and autonomous robots to conduct operations in hostile environments – such as the dark, freezing side of the Moon.

Rather than forcing humans to build around areas too dangerous for us, or making solar powered vehicles avoid dark spots all-together, the team created a framework to solve the problem — which is similar to an old math puzzle called The Traveling Salesman Problem.

In the Traveling Salesman Problem a scientist is tasked with discerning the shortest possible route for a salesman to travel between cities — without visiting the same place twice — and return to their point of origin. It seems simple enough if you’re traveling from say, New York to Chicago, then San Francisco and back.

But when you apply it to an environment like the Moon where you have to factor in the location of resources, dark spots, temperature fluctuations that could cause instrument and mechanical failures, and a myriad of other environment-specific tasks, the difficulty of controlling hundreds or thousands of independent machines making millions of decisions becomes too great for simple computations. Such an endeavor requires advanced deep learning solutions.

Intel provided the two teams with access to the Intel DevCloud which runs on the Intel Xeon Gold processors and includes MKL optimizations for Python and Tensorflow. And Intel provided a dedicated Xeon server for the localization team.

Eventually both projects could be scaled to work on other planets and satellites. The research is currently in early-stage development, but the path forward is clear: AI is the future of space travel and extraterrestrial colonization.

For more information visit NASA’s FDL page. And don’t forget to check out our artificial intelligence section for machine learning news and analysis.

Read next: Facebook no longer takes a cut of Messenger games on Android