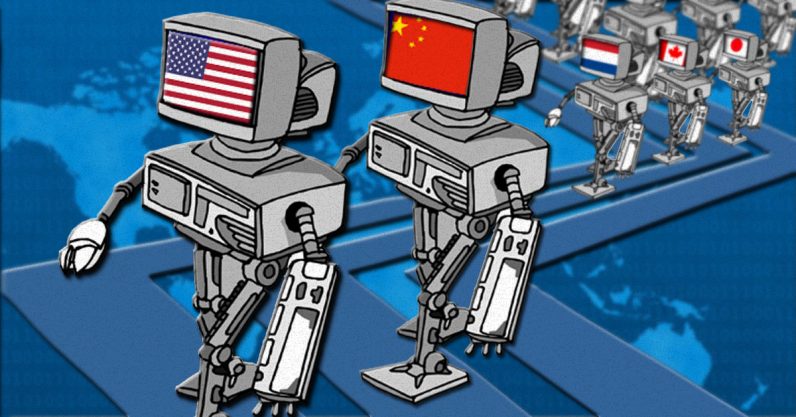 The US and China are leagues ahead of any other country when it comes to AI technology. And it’s because they know how to prioritize their own programs. Rather than waste time discussing the dangers of AI with the UN, or crafting global policy, the two countries have become AI nationalists.

Artificial intelligence research was a dying field just a decade ago. Now, AI companies like Google and Baidu are among the richest in the world. Fortunes have changed for the industry, thanks in no small part to a political environment treating AI research like general purpose software development.

This environment has allowed Google and Facebook, for example, to become global leaders in AI development – and a couple of the richest companies on the planet. Unfortunately it’s also a climate in which a company like Cambridge Analytica can exploit big data with, seemingly, few repercussions. Let’s not forget Google, Microsoft, and Amazon have all come under fire lately for helping the government develop projects that employees consider unethical.

Because the US ignores globalist calls to discuss international AI policy, and has none of its own, we’re left to trust that big tech companies and the federal government have our best interests at heart and will hold themselves accountable without laws or policies.

When US Congress members questioned Facebook CEO Mark Zuckerberg over the Cambridge Analytica data scandal, several showed they didn’t fully understand what had happened. And that’s a problem, because it makes it seem like the lack of policy comes from a place of ignorance.

There are perhaps 700 people in the world who can contribute to the leading edge of AI research, perhaps 70,000 who can understand their work and participate actively in commercializing it and 7 billion people who will be impacted by it.

If a disproportionate amount of those people can be found in the US, and politicians still can’t be bothered to come up with common-sense policies governing the development of AI, there’s little hope they will until they’re reacting to something bad.

In China, the government has a different – but equally nationalist – approach: the nation’s people exist in a near-total surveillance state. Algorithms determine who can use public transportation or purchase goods. Facial recognition cameras are used throughout the nation’s cities, including by police wearing special glasses. China, like the US, shows no apparent interest in developing global AI policies.

Unlike the US, however, the Chinese government is deeply involved in AI development and works with the country’s largest technology companies to develop local and global strategies for machine learning research and development. China dedicates billions to AI development and encourages companies to contribute to a state data library, among many other internal initiatives. It recognizes that it’s trailing the US – but the gap is closing.

Andrew Moore, Dean of Computer Science at Carnegie Mellon, says half of the papers submitted to big AI conferences come from China. A decade ago it was just five percent. And, globally, according to Hogarth, China was responsible for 48 percent of all AI startup funding last year.

Hogarth predicts AI nationalism is going to create global instability, he says “AI policy will become the single most important area of government policy.” His concern is that the US and China will effectively form a duopoly which will force other countries to either pick sides and choose a sponsoring parent-country, or band together in a sort of rag-tag group of spunky underdogs.

AI nationalism, for the US and China, seems to be paying off in the short term. But it seems irresponsible to assume there’ll be no consequences to developing cutting-edge AI without policies and development guidelines specific to that technology.

Read next: Apple releases first public beta for iOS 12. Here's how to get it.