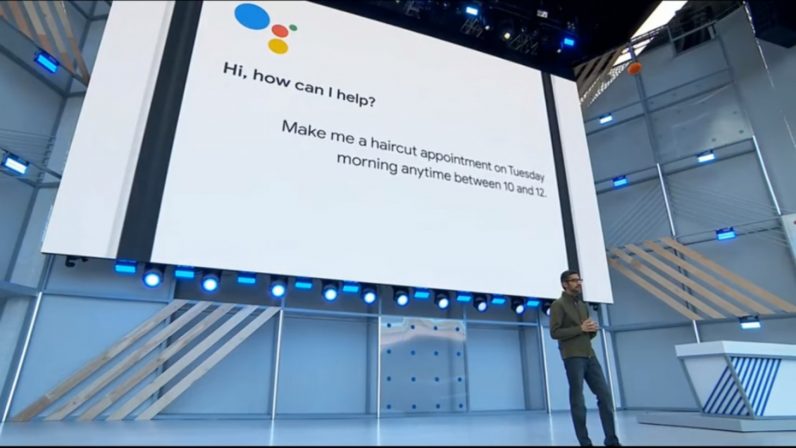 Google’s Duplex, an under-development AI system that makes phone calls on a person’s behalf has taken a bit of a beating in the media in the days since it was announced at the Mountain View company’s I/O event.

Basically, Google’s AI team built a neural network capable of conducting real-world business over the telephone on behalf of a human. When CEO Sundar Pichai debuted it on stage, it was immediately apparent from the crowd’s reaction that it was the first “omg moment” of the event.

I was in that crowd, and I’m not ashamed to admit I was quite wowed. But I wasn’t thinking about the convenience of having an assistant (virtual or otherwise) make my phone calls, or worrying about a future where people no longer communicate with each other. I was experiencing a certain kind of hope for the first time in my life.

It felt like maybe, in my lifetime, I might finally stop feeling pressured to use the telephone. And that was a surprisingly powerful feeling.

Let me explain: I’m uncomfortable talking on the phone, and always have been. I enjoy conducting phone interviews for work, because I get to be in charge, ask important questions, and nobody wants their time wasted. Otherwise, I’m emotionally rattled by phone silences and I get apprehensive to the point of becoming nauseated when people expect me to engage in small talk on the phone.

It’s easy to say: if you don’t like talking on the phone then, oh well, you can just use businesses that have an online presence, or apps.

But that’s not a very good solution for me. I don’t live in Silicon Valley where you can order a driver, a sandwich, or cannabis vape with the tap of an icon. Anyone who lives or has lived in a place where “online ordering” is considered something that fancy people in California do, will understand what I mean.

People with social anxiety often exist in a world where it feels like others dismiss their problems. The tidal wave of articles decrying Duplex, and similar technology, as parlor tricks may be warranted – it is, after all – but they ignore another point: this could improve quality of life for people like me (even if it’s not a fit for everyone).

In the wake of Google’s Duplex announcement, Microsoft purchased a voice technology company and started showing off its own phone-call making AI in China. It can only be assumed that a few other companies were working on similar solutions prior to Google’s announcement – and likely a lot more since.

Duplex may not, realistically, be anywhere as cool as it was advertised on the stage at I/O, but it makes an impressive first step.

After decades of trying to “fix” myself, it’s incredible to see the creation of technology that could, one day soon, help me spend less of my time feeling “broken.”