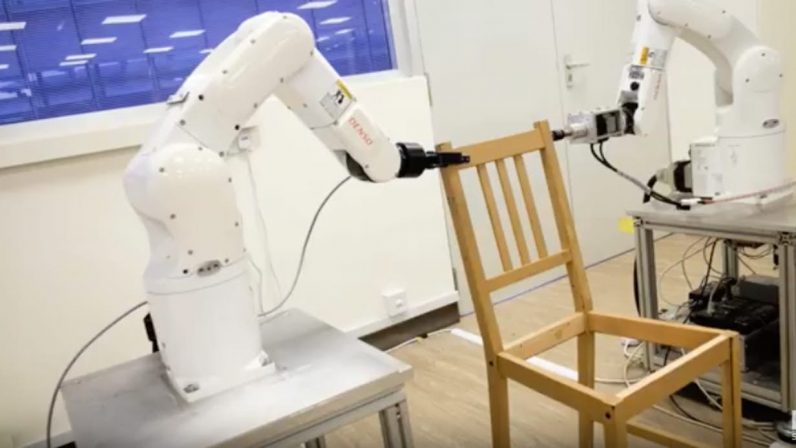 IKEA is cheap, stylish, and a superb solution for furnishing an entire dwelling on a budget. It’s also the leading cause of divorce in couples who attempt to assemble its furniture at home, according to a poll I just made up for the sake of this joke.

Researchers at Nanyang Technological University (NTU) in Singapore created a robot to do the grunt work for you, assembling an IKEA chair in all of 20 minutes. All told, the machine divvied up its time by spending 11 minutes and 21 seconds planning its motion pathways, three seconds locating parts, and then eight minutes and 55 seconds assembling the chair.

Built entirely of off-the-shelf parts, the team designed the robot with an array of sensors, a 3D camera, robotic gripping arms, and some really complex AI, relatively speaking.

According to Assistant Professor Pham Quang Cuong, who designed the bot with help from his team at NTU’s School of Mechanical and Aerospace Engineering:

For a robot, putting together an IKEA chair with such precision is more complex than it looks. The job of assembly, which may come naturally to humans, has to be broken down into different steps, such as identifying where the different chair parts are, the force required to grip the parts, and making sure the robotic arms move without colliding into each other. Through considerable engineering effort, we developed algorithms that will enable the robot to take the necessary steps to assemble the chair on its own.

The robot starts the process by taking photos of each part, which researchers laid out on the floor in a mess resembling the beginning s of a human-led IKEA project. From there, it creates a map of each part and its position on the floor. Then it sets out to assemble the pieces using pressure sensors that ensure the correct level of force for tasks such as slotting dowels and fastening the components.

You can see the device at work below.

Next up for the team is equipping the robot with advanced AI that would allow it to assemble other furniture just from looking at the instruction manual or a previously finished example.

I, for one, welcome our new IKEA furniture-assembling overlords.