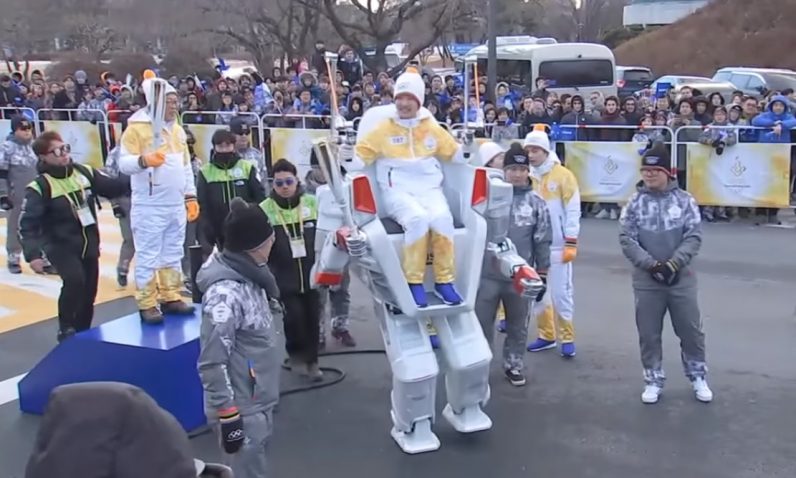 The most useful robots are purpose-built to aid or augment human endeavors. They build our cars, carry heavy objects, and even perform surgery. Over the last year, however, when it comes to robotics we’ve spent a lot of time scratching our heads wondering “is this really necessary?”

Let’s take a look at these robots you might find on an all-machine Island of Misfit Toys.

First, we tip our hats to MIT Technology Review for pointing out this YouTube video from South Korea:

Go ahead and skip ahead to the 00:55 second mark if you’re not incredibly interested in robots carrying torches (though, once they enter politics we should all be concerned about that).

The robot employs one of its “award winning moves” to cut a hole in a brick wall. Make no mistake, this is awesome — in fact we want to see more videos of robots destroying stuff. We just aren’t so sure why the brick wall is in the middle of the street and part of an Olympic torch relay.

Also, why haven’t we ever seen Chuck Norris kick a wooden door in the middle of a highway before passing a torch through the foot-shaped hole? Humans are good at randomly breaking stuff too.

Next, let’s not forget that Stephen Hawking and Elon Musk are predicting the rise of the machines, but maybe they haven’t met this poor bot:

Our D.C. office building got a security robot. It drowned itself.

We were promised flying cars, instead we got suicidal robots. pic.twitter.com/rGLTAWZMjn

Approximately one in all the robots in the world will drown every year. You can help prevent this by evolving into a species with no need for water.

When it comes to humans, our only natural enemy is robots from the future. The robots of today, however, have many predators. Chief among them: gravity. Feel free to skip to the 4:00 mark on this one.

Yikes! Let’s not blame the makers of the above robot, Boston Dynamics, because robots suck and they aren’t good at anything. You can’t expect to slap together some metal and wires and give it the ability to walk or run or do a backflip or anything, that would be crazy.

Consider us properly terrified. No matter how many times you watch it there’s a part of your brain that says “Wait, no, that’s not right.” Anyone else feeling awful squishy and soft right now?

Don’t think we’ve forgotten about you Sophia, we’ve saved you for last. I’m sure most folks who follow robotics will remember it. The robot, which was designed by Hanson Robotics to look like a human female, recently became a citizen of the Kingdom of Saudi Arabia.

“Sure I’m a robot, but it might be helpful to think of me as a new sort of animal species too.”

No, no it would not. Continued attempts to legitimize what’s basically Alexa with a face – even if it is incredibly advanced work by Hanson Robotics – as some sort of actual citizen or person are starting to feel in poor taste.

We live in a world where millions of human refugees are being turned away from country after country because there’s not enough ‘welcome’ to go around. Maybe someone should teach Sophia to talk about that.

The robot makers of the world are continuing to advance their crafts to amazing ends. We may not always agree with how robots are used (marketed), and some of them even scare the shit out of us, but we still can’t wait to see what happens next.

Unless it’s too fast for the human eye:

Read next: Twitter now lets you create tweetstorms before tweeting