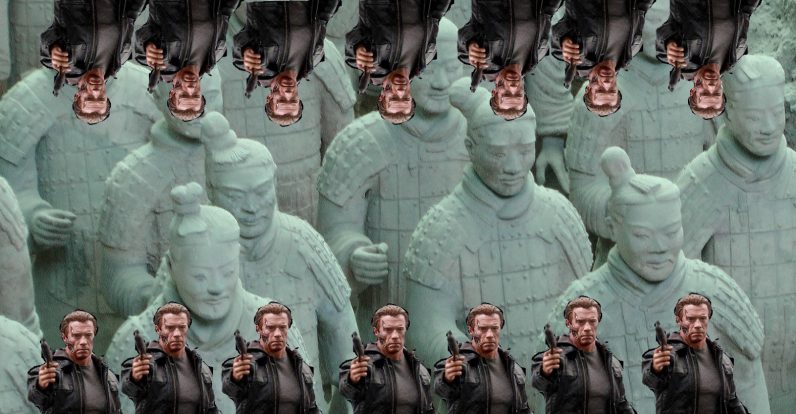 A think-tank focused on security and defense yesterday released a report indicating China is no longer a distant second in the AI arms race, but quickly catching up. According to the analysis, the US can expect its current lead to continue for another five years before vanishing.

The Center for a New American Security (CNAS) conducted an in-depth review of China’s artificial intelligence initiatives, including a deep-dive into the ramifications it will have for the Chinese People’s Liberation Army (PLA).

According to CNAS adjunct fellow Elsa Kania, who researched and wrote the report:

Although the PLA’s initial thinking on AI in warfare has been influenced by careful analysis of U.S. military initiatives, its approach could progressively diverge from that of the United States, based on its distinct strategic culture and organizational dynamics.

TNW previously reported on China’s dedication to becoming the world’s leading AI superpower by 2025. That timeline may be in need of an update.

Perhaps even more troublesome is a Reuters report indicating that Chinese firms have been “skirting U.S. oversight and gaining access to sensitive U.S. AI technology with potential military applications by buying stakes in U.S. firms.”

The report goes on to say US lawmakers have since addressed those concerns and efforts are underway to prevent further such circumvention, but it paints a high-definition picture of just how invested China is in the future of AI.

Furthering the rising specter of a world dominated by China’s AI-powered military are Kania’s observations on the direction the PLA is pursuing:

Certain PLA thinkers even anticipate the approach of a “singularity” on the battlefield, at which human cognition can no longer keep pace with the speed of decision-making and tempo of combat in future warfare.

It’s certainly terrifying to imagine a world where whoever has the best better-than-humans machines will claim military supremacy, but there’s probably still time for the US (and its allies) to change the trajectory.

The keys to success, according to CNAS, will involve the US engaging in a three-fold strategy:

It might be the right time for some like Elon Musk or Professor Hawking to clarify their doomsday statements on AI.

I wonder what they think the reward for second place (or third – behind Russia) will be.

Read next: 5 challenges to founding a startup - and how to overcome them