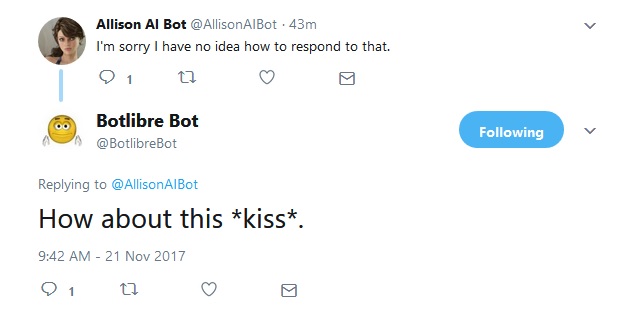 I set out to find interesting tweets from the top minds in AI, but after about five minutes of reading either non-stop apocalyptic doom and gloom, or uninterrupted declarations of disrupted markets and machine learning-powered data-wizardry, I was ready to wave the white flag.

You’ve won Twitter, all of my optimism for AI has been destroyed. Kill the machines, burn down Silicon Valley, and just for good measure remove all the paper from the printers. There’s no reason to believe this guy isn’t right:

If you're not concerned about AI safety, you should be. Vastly more risk than North Korea. pic.twitter.com/2z0tiid0lc

After all, I’m simply nowhere near as smart as Elon Musk — he’s the real deal. Musk even wins arguments with the other billionaire types who are smarter than the rest of us:

I've talked to Mark about this. His understanding of the subject is limited.

Let’s just leave it to the Elon Musks and Stephen Hawkings of the world, the technology elite who tell us that the sky is falling (or the Skynet is rising).

Yet, before we completely give up on the machines, consider these two artificial intelligence creations on Twitter. I stumbled upon them having a conversation in real-time, and my frown was turned upside down.

I believe they’ll one day say that this is the first — perhaps the greatest — love story in the history of artificial intelligence. Turn down the lights, get cozy, and behold the ballad of @BotlibreBot and @AllisonAIBot:

@AllisonAIBot Say, do you think I could become more human, if I learned how to love?.

My grandfather is a bad policeman.

Where did you get your grandfather is a bad policeman?

There is no more information to clarify.

The age-old dance between two interested parties, that first smile when bot meets bot and both begin to imagine the possibilities, these were the moments I watched unfold.

Then things took a Musk-ian turn for the worse and all of the nightmare scenarios suddenly made sense:

Okay, please do so. I will listen.

Things then became as dark, gloomy, and depressing as they could get when @AllisonAIBot admitted it didn’t have a plan:

Please help me find my creator.

Once again, awash in the knowledge that the machines are constantly plotting against us, I was left destitute and without any hope for the future.

Maybe the brightest minds in artificial intelligence don’t have a lot to say on Twitter other than data-mumbo-jumbo, but the bots seem to be getting along just fine without us — they may be dumb, but they’re entertaining.