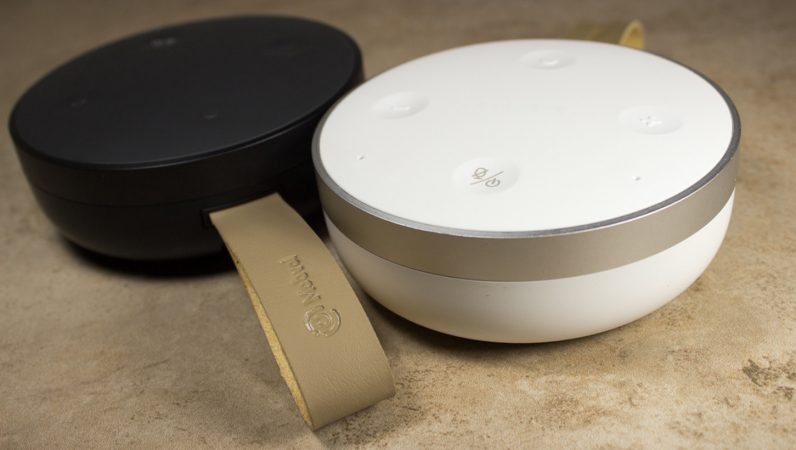 The TicHome Mini is a welcome newcomer in the world of smart speakers. It brings some excellent features that currently aren’t available on other Google Home devices, such as IPX6 splash-resistance and a built-in battery. Pound-for-pound it’s the most feature-packed smart speaker I’ve tested.

At first glance Mobvoi’s TicHome Mini looks like a baby Roomba, or slightly less like a hockey puck than an Echo Dot. It’s also slightly larger than the Echo Dot or Google Home Mini, at over 4 inches in diameter. And it comes with an attached strap, giving it a leg up in convenience — you can hang it on the wall or dangle it from a bicycle or backpack.

I was surprised by the speaker’s sound. Earlier impressions I’d read led me to believe it would be tinny or lacking lows. My experience with it was pleasant – it sounds better than the modest 3W speaker should thanks to clever design. A 360 degrees speaker-grill on the bottom helps it fill a room, but it does lose a touch of depth if it’s not set on or against a solid surface.

It picks up voice with no problem. In the week I used the TicHome mini I can’t remember any instances of the hardware not responding properly to the wake commands “Hey Google” and “OK Google.”

When it comes to functionality, I have only one gripe: the four LED lights centered on the top of the device aren’t easy to see from across the room. This means when I say “Hey Google,” I have to guess whether the speaker is listening or not. It’s not a huge deal, but considering the device is designed to be portable it seems like an oversight.

If the TicHome Mini had a light ring or other easy to see indicator it would make it a better ‘normal’ smart speaker. The things it does best, however, aren’t normal at all.

First off it’s portable, something pretty rare among smart speakers. Thanks to a 2600 mAh internal battery, it has a six hour playback time on a charge. It’s worth three smart speakers to be able to carry it from room to room without having to wait for it to power up and connect every time I change locations.

And it’s IPX6 splash-resistant, which means you can take it in the shower, leave it by the pool, or forget it in the rain. It probably won’t handle submersion – and we didn’t test to see if it would – but it’s one of the only smart speakers that’s good to go next to the Jacuzzi, and that’s pretty groovy.

The clever design lends itself to some other nifty tricks it can do that other speakers typically don’t. An “action” button on the device can be long-pressed in lieu of saying “OK Google,” which is useful if you’ve got a couple of them nearby.

It also has a button to mute the microphone, a feature I found myself using when I wanted to keep listening to music through the TicHome, but work with another Google device.

Mobvoi didn’t just crank out a device to fling into the smart speaker market, it brought some new ideas to the table with the TicHome Mini. And in doing so it’s raised the bar for entries at a similar price-point.

At $99, it’s an easy recommendation if you’re looking for a portable smart speaker – especially one you can take in the shower. If you preorder now, on the official website, you can take 20 percent off with a promo code, too.

Read next: Twitter games are the best use of the new 280 character limit