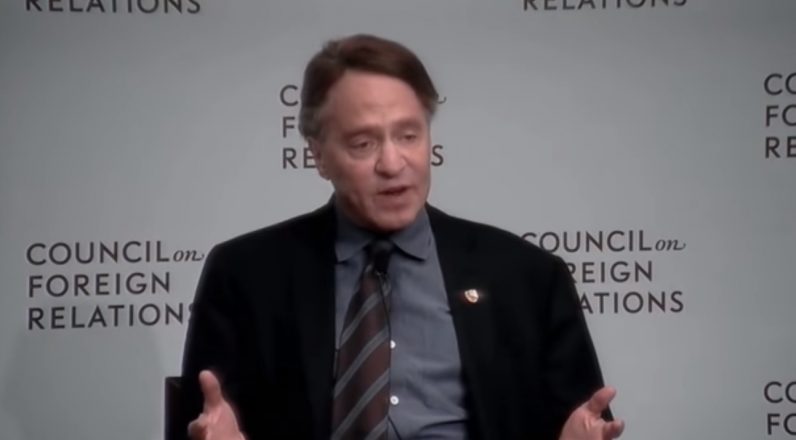 Public perception of artificial intelligence technology, in 2017, seems to lie somewhere at the intersection of existential fear and cautious optimism. Yet there’s a growing movement of people who believe AI is crucial to the evolution of our species. These people aren’t outsiders or outliers — they’re actually directing research on the cutting edge at companies like Google.

Ray Kurzweil, Google’s guru of AI and futurism, spoke last week at the Council for Foreign Relations, in an intimate Q&A session. His views on the future of humanity might seem radical to a public that’s been cutting its teeth on doomsayer headlines featuring Elon Musk and Stephen Hawking warning about World War III.

He’s quick to point out that today, right now, is the best our species has ever had it. According to him, most people don’t know that the world we live in currently has less hunger and poverty than ever before. “Three billion people have smartphones, I thought it was two but I just found out it was three. In a few years that’ll be six billion.” he says.

The deadliest war in recorded human history, World War II, ended just 72 years ago. In the time since, humanity has engaged in what feels like countless skirmishes, police actions, and outright wars. And while the US remains engaged in the longest war in its history – with no end in sight – the human species is currently enjoying the most peaceful period in the history of our civilization.

The existential fear is that AI will somehow compromise this progress and send us careening into the next extinction-level event. If technology like the atom bomb made World War II so much worse than everything before it, doesn’t it follow that WWIII will be even more devastating?

It’s more complex than that, according to Kurzweil. He believes part of the reason we’re able to coexist so wonderfully (in the grand historical scheme) for so long is because democracy has begun to take hold globally. He also believes the rise of democracy is the direct result of advances made in communication technology. According to him:

So what’s next? He believes we’ll all be less biological, because humans are always evolving, and the next step of our evolution will be the internal implementation of technology. The human-robot hybrid won’t be a monstrosity of metal. It’ll just be a chip in your brain instead of an iPhone in your hand.

In the future it’ll be no more shocking to think about the weather in Hong Kong and get an answer than it is to say “Hey Google, what’s the weather in China?” and receive accurate information from a glowing rectangle with a speaker inside of it.

Kursweil believes “medical robots will go inside our brain and connect our neo-cortex to the smart cloud” by the year 2029.

That’s a jaw-dropper, even for a technology journalist who writes about AI regularly. It’s pretty hard to imagine people walking around with their brains connected to the cloud before Justin Bieber turns 35.

But dismiss Ray Kurzweil’s predictions at your own peril: he’s seldom wrong. When it comes to technology he’s gone on the record with hundreds of predictions, which is what futurists do, and he’s correct over 90 percent of the time.

According to Kurzweil the future is incredible, but it’s also worth mentioning that his view of the present is pretty fantastic as well. He reminds us that “just a few years ago we had these devices that looked like smartphones but they didn’t work very well,” and he’s right.

Today’s smartphones know how to respond to complex voice commands like “find all the pictures from my trip to San Francisco” and “play Star Trek The Next Generation season three, episode 16.” Today’s phones can recognize who is talking, pick out your voice even when music is playing, and execute the command without a hitch.

But just a few years back, most of us quickly gave up on using voice control regularly, because we were sick of repeating ourselves. We figured we’d wait until the technology got better. Tada! It’s better now.

The truth about AI, according to experts such as Ray Kurzweil, is that there’s no part of our lives that won’t be directly affected by it. As individuals we probably won’t notice the changes in real-time, but our dependence on machine learning will increase at exponential rates.

The law of accelerating returns is behind the artificial intelligence revolution — and Ray Kurzweil’s predictions. The very limits of what is “possible” concerning machine learning are going to require reevaluation on a daily basis going forward.

Read next: Some iPhone X displays plagued by mysterious 'Green Line of Death'