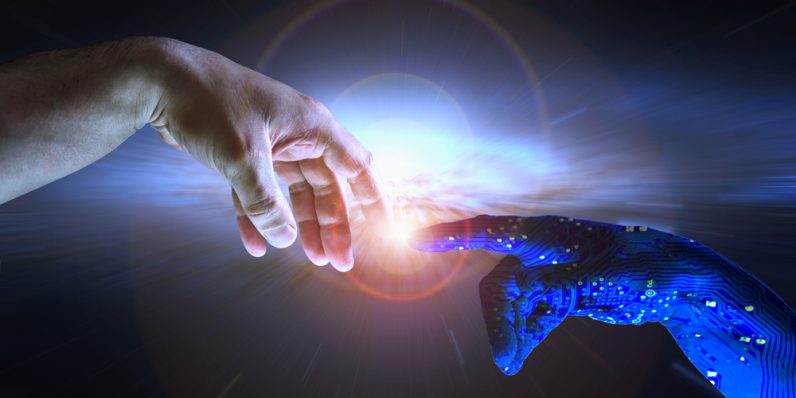 A former engineer for Waymo, one of Google’s sister companies under Alphabet, recently filed paperwork to become the “CEO” of a religion based on the worship of an AI. He’s not the first person to suggest that technology can be spiritual, and it’s easy to dismiss it as silly or offensive. But his timing couldn’t be better.

The religion in question, “Way of the Future,” is a veritable unknown — there aren’t any details to share or analyze. Anthony Levandowski, the gentleman responsible for it, didn’t exactly choose to alert the media to his plans.

Levandowski has been the subject of an ongoing legal battle between Uber and Waymo, in which he’s been accused of data theft. His religious documents were revealed when a Backchannel investigation into the case uncovered them.

The gist of what we know: he’s starting a religion based on the worship of “an AI godhead,” and he applied for non-profit status as its CEO and founder – as opposed to being called a priest or prophet, we presume.

Since Levandowski’s big idea was revealed, the media has run with the story, experts have been consulted, and Elon Musk has weighed in with doom and gloom — right on cue.

On the list of people who should absolutely *not* be allowed to develop digital superintelligence…https://t.co/reNZ50FGNC

As a non-practicing, non-denominational, lapsed atheist it’s just as easy for me to turn my nose up at the idea of a machine God as it seems to be for Musk. I’ll be perfectly clear: I don’t think an AI can be a God any more than I believe an apple can be an orange. AI is always AI, nothing more and nothing less.

I do believe, however, the worship of an AI God makes perfect sense – if you subscribe to the idea of “faith-based religions.”

Humanity has, arguably, invested more faith – belief based on things we cannot know or do not understand – in artificial intelligence than any other concept in recent memory.

Billions of people – statistically “most” people – interact with AI on a daily basis. We trust the translations from Google, Bing, and Facebook’s artificially intelligent machines. In today’s world wherever there is infrastructure there is AI.

When computers teach themselves to create better algorithms than the humans who created them – we’re seeing things happen that even the developers themselves can’t fully explain.

Black box AI, unsupervised machine learning, and global adversarial networks are all examples of computers doing things even the most savvy programmers can’t fully explain. None of this is spooky, scary, or indicative of Elon’s worst fears, mind you.

It’s all yesterday’s news really; computers are fast and that’s useful. Instead of taking a million years to add up numbers or look for words, we use short cuts called algorithms to let computers do it for us in seconds.

The humans involved, developers and engineers with boots on the ground in the AI space, will likely feel the urge to refute my “leap of faith” in saying what they’re doing is anything even remotely close to what a God or religion does when they teach a computer to learn. They’re probably right, but it might not matter.

A religion based on the worship of AI will, in my opinion, be comprised of people who don’t give a shit how their “God” came to be made, what its limitations are, or that it was created by humans. They won’t be worshiping the code: they’ll pray for answers and receive them; and that will be good enough because instant gratification is an easy concept to sell.

AI doesn’t exist in nature, it doesn’t come to us organically, and it has no soul: it’s a hammer that’s been designed to work with data as its nails. But that’s not always going to be the case.

At the risk of stretching this analogy so far it loses elasticity, hammers and nails aren’t capable of creating other hammers and nails better than the ones that people can make. But AI, today, is able to replicate itself and create original machine learning code.

This is what the “I” in AI means: machines have something so close to intelligence – a property that, arguably, doesn’t exist in nature aside from humans – that there isn’t another word for.

AI will soon stop being a hammer and become a carpenter (I promise, that’s the last time I’ll go to that well) because it’ll have more to teach us about ourselves than our entire collective knowledge does. We then become arrogant when we tell AI how we want something built; our best interests will lie in asking the machines to figure that out — because they’ll be better at it.

Computers will be able to tell us everything we know about each other by seeing – for the first time in history – a complete overview of our species’ knowledge of self. Through AI we will gain the ability to see ourselves as, we might imagine, a God would.

That doesn’t make the machines our Gods, but instead – and perhaps even more dangerous than just some new religion on the block – it empowers people to eschew philosophy for evidence.

Still, the truly religious understand that spirituality is its own reward, and faith doesn’t change just because a new technology comes around. A true belief in God, one reckons, could never be challenged by an AI.

It’s well and truly impossible to make the argument for an AI deity — I’ll need a lot more evidence to be convinced AI will ever reach sentience. Which makes the most problematic part of Levandowski’s “Way of the Future” his assertion that “worship of a godhead” will somehow lead to “the betterment of mankind.”

It sounds, to me, like he’s advocating “drinking the Kool-Aid” and trusting that only good things will happen. To that, I say, “Check please!” And I am done with his foolishness.

Yet, I’ve already turned to Google’s search engine for things I used to go to libraries or experts for. In fact I’m ashamed to admit I’ve stopped trusting humans, not because they are untrustworthy, but because they are ignorant. None of us can look things up as fast as Google’s AI can. It’s a librarian that’s memorized the content of all the books.

Machines have so much to teach me! And as they grow and work together, when millions or billions of collective neural network-based systems become interlaced, AI’s capacity for understanding the human condition will vastly exceed our own.

In our lifetimes it is very likely that a cold, dead, soulless computer will have a far greater understanding of how we can live our happiest and healthiest lives — on an individual level – than any group of humans ever could. When that happens it won’t matter whether machines are Gods or not.

Humans already kneel before the altar of the glowing screen. It’s not going to be difficult to convince them to worship an artificial intelligence that understands them better than they do themselves.

Read next: Twitter just updated the rules that apply to almost all of its users