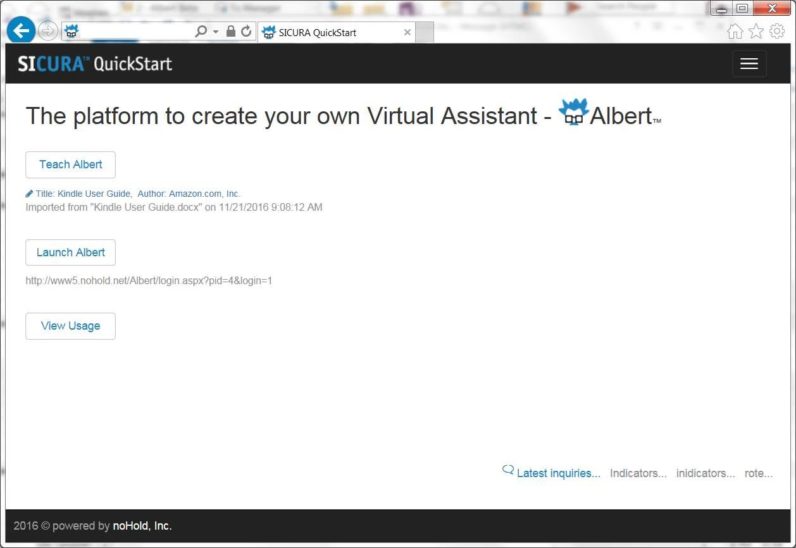 There’s a strangely poetic beauty about the birth of a chatbot.

Over a shaky WebEx connection, NoHold CEO and Co-Founder Diego Ventura showed me how one can take form in just a few moments.

The chatbot had a very simple job. It was created to be an Amazon Kindle savant. You could ask it anything, like “Where’s the Wi-Fi settings?” and it would spit out the correct answer every single time.

Normally, this would take time, effort and the combined skills of a team of software developers. But Ventura was able to do this by feeding it the Amazon’s official Kindle Guidebook. And he was able to do this thanks to NoHold’s latest product, QuickStart.

From word documents to chatbots

NoHold has been heavily involved in the AI field since it first launched in 1999. “Back then there was a real stigma against artificial intelligence, and we were advised by investors to not use the term,” Ventura told me.

Despite the initial trepidation, NoHold thrived. It managed to secure a $15 million round of funding, which it ploughed directly into developing its technology. Large, blue-chip companies like Intel and Dell turned to NoHold to create virtual assistants and AI products.

And now, the company wants to extend this to home users and small businesses.

It’s certainly an opportune time. Consumer interest in chatbots and virtual assistants has soared over the past twelve months. This can be attributed partly to initiatives like Bots for Messenger and Skype Bots, both of which have pushed the concept into the mainstream.

But making a bot is hard. If you want to make even the most basic Facebook bot, you need to have an understanding of software development.

Ventura said that NoHold spent a lot of time thinking about how to level the playing field. “We wanted to make Microsoft Word the minimum common denominator to create a virtual assistant,” he explained.

Ultimately, NoHold came up with QuickStart (which is also nicknamed Albert). This product is aimed at small businesses, startups, and home users, and allows anyone to feed it a piece of structured text, like a Word document, and ultimately product a chatbot.

Perhaps the most impressive thing about QuickStart is how NoHold has managed to distill the process down to the simplest possible level. There are just three buttons.

The first is “Train Albert”. This is where you upload your document – any document – for processing. Ventura tells me that this can process 100 pages per minute. This includes pictures and tables, and is done automatically.  It just works.

The second is “Launch Albert”, which initiates the chatbot. There are two ways possible was a user can interact with it. First, they can type out their question into a small textbox at the bottom. QuickStart interprets this using Natural Language Processing technology.

If there’s ever any ambiguity, rather than guess and give the user a potentially incorrect answer, it will ask a follow-up question in order to discern what the user is asking.

Alternatively, QuickStart will ask the user what they’re looking for, allowing the user to tap through a selection of automatically-generated questions.

Finally, there’s “View Usage”. You can figure out what that does.

That’s it. Three buttons. My microwave oven is more complicated.

Where this is going

QuickStart will allow businesses to create their own customer service chatbots with a minimum of effort or expense. There’s a free tier, as well as a paid tier that allows businesses to apply their own branding, and to make it their own.

But there’s a bolder vision behind it. Diego Ventura believes that the future of artificial intelligence isn’t centered around one company, but rather distributed.

“We don’t believe that the next generation of AI is going to come from one company. We are all going to be part of this project in a Wikipedia kind of way. There’s going to be a platform that will allow anyone to create a AI program.”

He also sees a future where chatbots are interconnected in a coherent ecosystem, and can depend on each other to best support users. Diego showed me one customer service chatbot used by Cincinnati Bell which, when asked about a Dell-manufactured phone, redirects the user to Dell’s chatbot.

Starting from today, you can test QuickStart for free in an open beta.