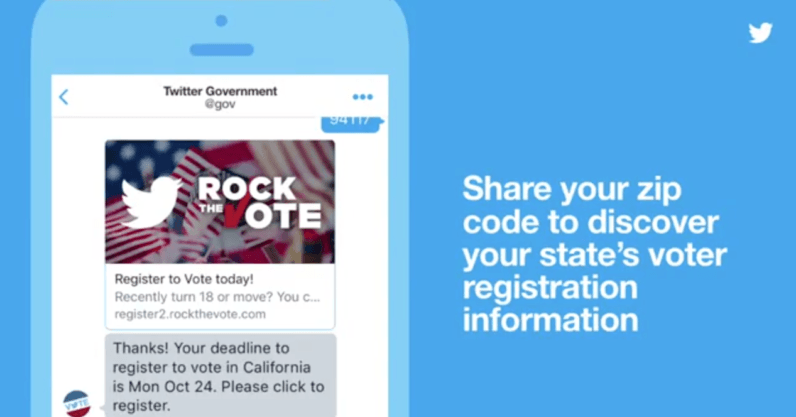 To celebrate National Voter Registration Day, Twitter has announced a new feature that makes it it easier than ever for US residents to register to vote in the presidential election.

Starting today, when a Twitter user sends a Direct Message to the official @Gov account with their five-digit zip code, they’ll receive an automated response with their state’s voter registration deadline and a personalized link to register.

Through a Direct Message with @Gov, Twitter can help you find your state's voter registration deadline and register to vote. pic.twitter.com/ySh2elJgY6

As we get closer to Election Day, Twitter will invoke a new partnership with Pew’s Voting Information Project and Google’s Information Civic API to answer additional questions submitted to @Gov, such as “where’s my local polling station?”

If you’ve already registered to vote, be sure to let your friends know by sending out a tweet with the hashtag #iRegistered. This generates a neat little emoji — pictured below — which, when pressed, redirects users to a page where they can register.

Read next: This website turns your photographic genius into crayon wall art