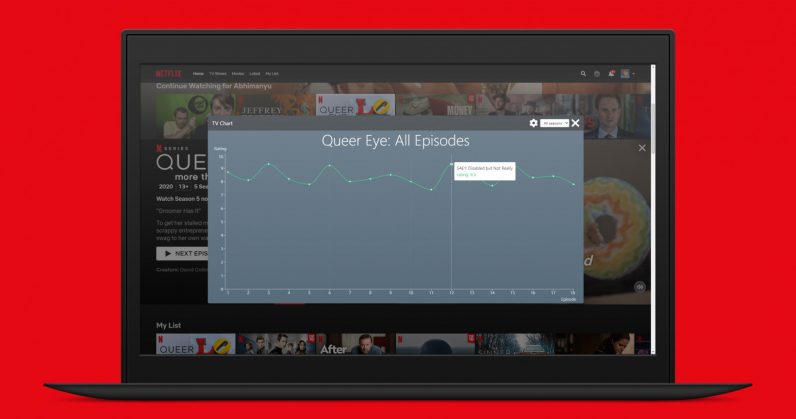 Back in July 2018, Netflix killed off its user reviews system on its streaming platform, to the dismay of many a devoted viewer around the world. It’s since switched to a woefully hampered system that recommends titles based on your interactions with the service, including simple ‘thumbs up’ and ‘thumbs down’ reactions to content you’ve watched.

This doesn’t help me in the least when I’m looking for something to binge — yeah, I know I went on true crime documentary spree last month, but that doesn’t mean that’s all I care about. And telling me that a certain show is a ‘72% match’ with my habits doesn’t encourage me to watch it either. That’s why I’m glad I just discovered TV Chart, a clever new Chrome extension that brings IMDb ratings to your Netflix account.

There’s nothing to it: simply install the extension, then fire up Netflix in Chrome, and click on the graph button next to the title of a show or film (it works in detailed previews as well as in thumbnails when you hover over listings) to reveal its ratings pulled from IMDb.

The charts for TV series will display the ratings across all of their seasons and episodes, which makes it easy to figure out if they’re worth watching. You’ll be able to tell if a show has been consistently good, and can also quickly find the best episode to just jump into and see for yourself (this obviously works better for series without a continuous storyline).

TV Chart was made by developer Benjamin Mizrahi, and works like a charm, for the most part. It seems to have issues with some content: it couldn’t pull up the ratings for Brit comedy series Man Like Mobeen, and didn’t display a ratings button for Jeffrey Epstein: Filthy Rich. Hopefully, these are just bugs that can be easily resolved.

Give TV Chart a go in Chrome or Opera (yes, you can use Chrome extensions in Opera, here’s how) by installing it from this page.