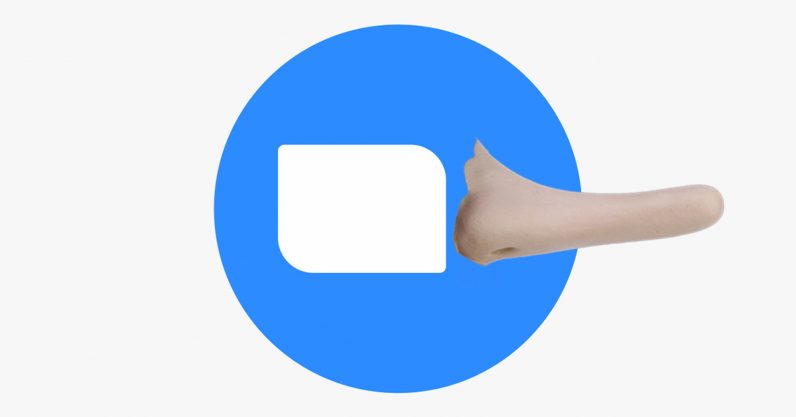 Many businesses are struggling during the coronavirus pandemic, but not Zoom. Just last week, the video conferencing service boasted it had over 300 million daily active users — an achievement so astounding, many refused to believe it. Well, it turns out they had a good reason not to.

Zoom has quietly admitted it lied about the number, The Verge reported. The company has scrubbed all references to “daily active users” from the blog post, where it initially made the claim. Instead, the post now suggests the company has “300 million daily Zoom meeting participants.”

So in reality, the number of actual daily active users is likely much lower.

Pressed about the misleading language, Zoom told The Verge the company is “humbled and proud to help over 300 million daily meeting participants stay connected during this pandemic.”

“In a blog post on April 22, we unintentionally referred to these participants as ‘users’ and ‘people,'” a spokesperson added. “When we realized this error, we adjusted the wording to ‘participants.’ This was a genuine oversight on our part.”

A part of me wants to believe it’s an honest mistake — a case of a growth hacker messing up terms and a content marketer rolling with it, or something innocuous like that — but the company’s record of making misleading claims is too extensive to give it the benefit of the doubt.

The timing for these stupid games couldn’t be any worse either. Since its sudden boom, Zoom hasn’t gone a week without finding itself in the center of controversy.

In the matter of less than a month, the video call service was caught secretly sending user data to Facebook, leaking emails and personal photos to strangers, and lying about its encryption, which resulted in a stakeholder lawsuit due to overstating its privacy standards. Researchers also found glaring security holes, which could’ve exposed users’ Windows credentials.

I’m not even getting into the Zoombombing saga.

In the meantime, giants like Facebook and Google have been scheming to snatch a piece of Zoom‘s pie. The Zuckerberg Empire launched its own video service, Messenger Rooms, which supports up to 50 participants. Yesterday, the Big G announced it’s making Meet free for all, taking not-so-subtle digs at Zoom by bragging how secure its software is.

The shame is it’s not Facebook and Google, but Zoom itself that has become its biggest enemy.

The puzzling bit is that 300 million daily meeting participants is still an incredible success. Why Zoom would jeopardize staining such a milestone by engaging in silly mental gymnastics is beyond me.

Just like that, a success story (yes, I know Zoom has dealt with a litany of security issues, but that doesn’t negate the fact people are flocking to its service) has turned into yet another anecdote about grandiose self-importance — a quality too familiar to tech startups.

Congratulations, Zoom, you played yourself.

Read next: 15 simple tips to get better search results on Google