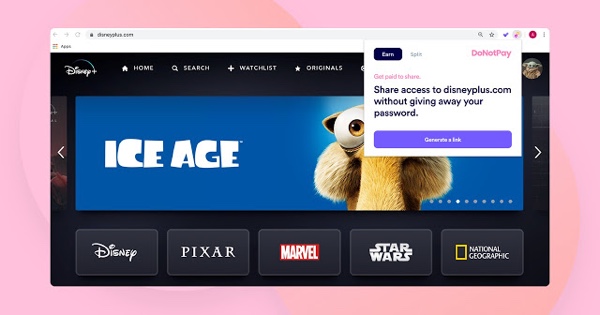 There are two types of people in the world: those who share their Netflix login, and those who are using those credentials. But your friends might often forget how to login to your Netflix account. So, you’ll need to go through an unsecured ordeal of sharing your Netflix username and password. Well, you don’t need to do that anymore.

DoNotPay, a company that previously developed an AI-powered bot for legal matters, has launched a new Chrome extension that lets you share your streaming service credentials in an encrypted manner. But the buck doesn’t stop there. The extension even lets you trade or share subscriptions with other folks in order to save money.

To share an account, both the sender and receiver will have to install the DoNotPay extension and verify themselves via SMS. As VentureBeat noted, the company shares your credentials through encrypted cookies of your selected streaming services.

[Read: 7 best coronavirus dashboards to map the spread of COVID-19]

There’s no limit on how many people can use your shared account, and the Chrome extension lets you see who’s using your account. Plus, you can revoke access to prevent misuse of your account, or if you just want to boot that ungrateful freeloader off your Netflix.

Streaming services have frowned upon password sharing since forever. Last year, Spotify began asking users sharing a family plan to verify their location, so as to curb rampant sharing among friends and non-familial contacts. The Alliance for Creativity and Entertainment, a group of companies that includes Netflix, Disney, AT&T, and Amazon as members, said last year that it plans to crack down on password sharing.

On the other hand, there are new tools cropping up to send your credentials to your friends. Last month, a developer named John Bakus, released a beta version of password sharing service for friends called Jam.

You can install DoNotPay’s extension from here.

Read next: 4 lessons I learned after spending $6 million on Google Ads last year