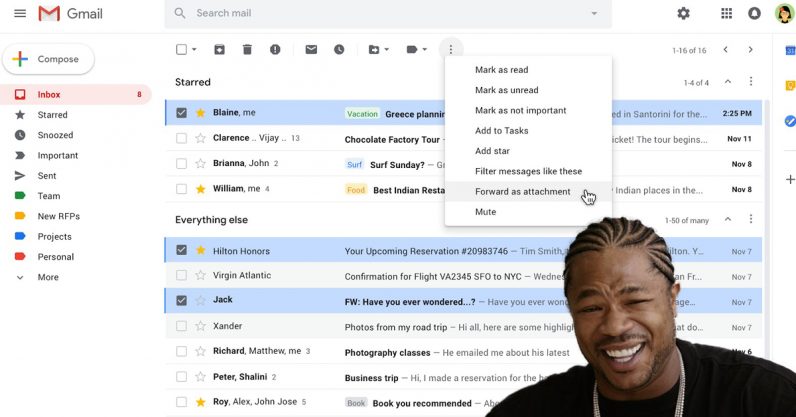 Forget about forwarding emails: Google is rolling out a new feature in Gmail that lets you send emails as attachments — sort of like an email within an email. Pretty nifty.

The best part? You can attach as many emails as you’d like. To do that, simply select the emails, and drag and drop them. Alternatively, you can right click the selected emails and use the “Forward as an attachment” option.

Here’s how this works:

Email attachment should come in handy when you have to forward multiple messages related to the same topic. Usually, that’d have to be done in separate emails, but the new implementation makes it possible to string forwards together.

That should help you avoid clogging your inbox.

There’s one slightly unfortunate bit of news, though: Google has gone for a gradual release, so the feature won’t be immediately available to all users. “You’ll know this feature is available to you when you see the ‘Forward as attachment‘ option in the three-dot More menu,” Google says. Keep an eye out.

If you’re in the early release group, lucky you; if not, hang in there, bud — it shouldn’t take too long. Until then, keep forwarding the old fashioned way.