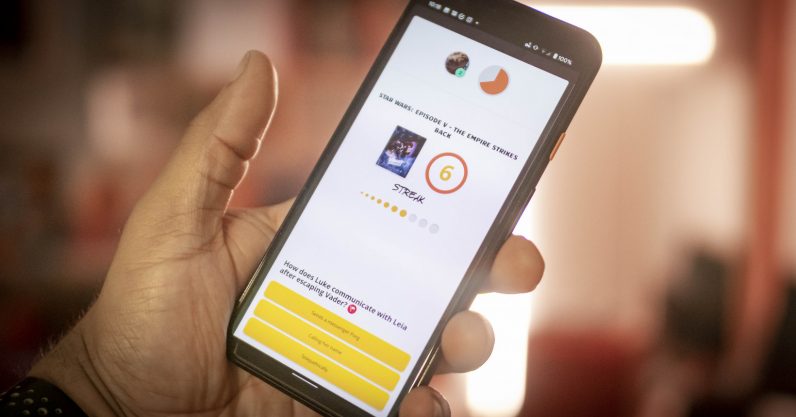 Here’s a radical thought: You can’t boil down a movie’s quality to a simple numerical score.

Everyone knows this intuitively, of course. But for better or worse, rating aggregators like Rotten Tomatoes and Metacritic have been bestowed the authority to gatekeep a film’s ‘goodness’ by virtue of the simplicity and power of consensus. Unfortunately, It’s not hard to find examples for the worse; one need only remember how trolls disproportionately decimated audience scores for films like Captain Marvel and Star Wars: The Last Jedi.

Qurator, an upstart review aggregator, tries to fix this problem. Created by director Thomas Ikimi (Legacy, Nostradamus) and actor Brandon Victor Dixon (Hamilton, The Color Purple), it aims to help moviegoers and amateur film critics participate in a more meaningful kind of consensus. Instead of a free-for-all audience score, Qurator aims to highlight reviews from people you can trust… and keep out the trolls.

How do you fight off those parasitic, angry keyboard warriors, you ask? Test them. Make the trolls prove they’ve actually, you know, seen the movie.

It’s an idea so simple, I’m amazed it hasn’t been done before.

Sure, Rotten Tomatoes has recently doubled down on authentic reviews by introducing a verified audience score. This requires amateur reviewers to prove they’ve seen a movie by confirming their ticket purchase. But Qurator goes further, allowing your review to count for old titles, requiring you to prove you paid attention, leveraging its test to highlight reviews from people who watched the movie most intently. It’s pretty fun too, using a gamified process for the quizzes.

It works like this: Find a movie you want to review and tap the Qurate button. A countdown will begin, after which you have to try to correctly answer questions about the movie within 60 seconds. Score above 50 percent, and you qualify to rate and review the movie. You are assigned a badge based on our score, which denotes how well you know the movie. You also earn more ‘prestige points by scoring higher and submitting written reviews, which count towards your overall skill ranking. Basically, you ‘level up’ by scoring higher and reviewing more movies.

If you fail the test, you are given one more try, but this time have to get 75 percent of the questions right (which isn’t as hard as it sounds, as some of the questions will be repeated from the previous session). If you fail twice, you need to successfully rate 5 other movies before you can unlock that movie again.

While a troll could, in theory, study up on the quizzes answers, it’s a far stricter barrier for entry than any other score aggregator I’ve seen. In any case, Qurator doesn’t seem too concerned. From it’s FAQ page:

The whole point is to make sure people who rate and review actually know enough about the film to justify giving that opinion. If someone has that much time and desire to study for a movie they haven’t seen just so they can give it 0 or 10, then they earned the right to troll in our view. We are raising the bar for the professional trollsters!

The other boon to Qurator’s system is that it makes it easy to follow reviews from people you trust. Ikimi likened it to an Instagram for movies; you can find others with similar tastes to your own – or whose opinion you otherwise respect – and then follow them for their latest coverage. Upon registering, users are asked to pick the three movies they’d take on a deserted island. These are listed on your profile, and are a simple way to find people whose tastes you agree with.

The beauty of this system is that it allows you to find other Qurators who review movies through a particular lens. I, for example, am obsessed with film scores – the musical kind. I can often tell you more about a movie’s leitmotifs than I can about its plot minutiae, therefore I weigh music more heavily in my reviews. Though usership is still small, I could, in theory, follow other reviewers who also care about movie music.

Alternatively, I could look for reviewers who offer up a different perspective from my own, perhaps those who provide fresh angles on cultural issues or relevance to film history. The point is, Qurator tries to make it easier to seek the reviews you care about.

The execution needs some improvement; as of writing, the app is still very much a work in progress. I wasn’t able to find several of the movies I wanted to review, and the interface feels like it belongs at the beginning of the decade. There’s also currently no way to post reviews on a desktop, which Iikely promotes people to leave numerical ratings and short reviews rather than thorough analysis. This is compounded by the fact you can’t currently, say, assign a score for a review and then edit it to provide longer thoughts later.

The quizzes themselves could use some refining; I sometimes felt like the 60 second time limit and specificity of questions were needlessly restrictive. Do I really need to remember how many stripes that character had on his sleeve? Probably not.

Still, I was almost always able to pass quizzes for movies I’ve seen and failed the ones for movies I haven’t. That should be enough to scare away the trolls. Though it has some kinks to work out, Qurator has the potential to instigate more honest, nuanced, and personal film criticism.  Movie reviews would be better for it.

If you’d like to give it a go, you can download Qurator from the App Store and Google Play now, or view movie rankings on myqurator.com.