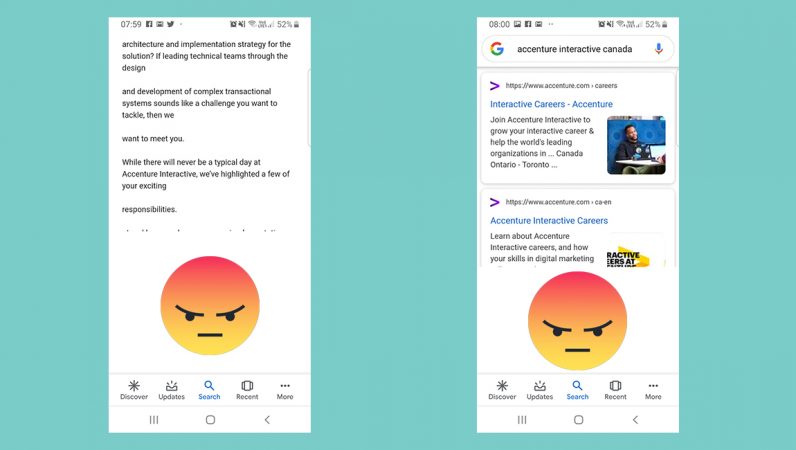 No, you’re not the only one: a bunch of Android users are complaining they’re unable to load Google Search results in full on their phones.

Numerous reports claim Search result pages aren’t completely rendering, randomly leaving a “white wall” at the bottom. The issue has persisted for at least “the past few days,” according to users on Twitter. Indeed, one user on Google’s support forums claims having experienced the issue as early as July 20.

It appears the bug affects a wide range of devices, with users reporting having trouble rendering Search results on Samsung’s Galaxy S9 and S10 lineups, and even Google’s own Pixel series.

Here are a couple of screenshots from the rendering flaw:

Although it seems the issue mostly affects the Google app, some reports suggest the issue also occurs in Chrome for mobile.

The Big G has confirmed the glitch on Twitter, claiming its team is looking into it. Unfortunately, the company didn’t specify how widespread the issue is or when it expects to straighten the kink.

We're aware that for some people, our search results page might not be fully rendering. We're actively working to resolve this bug.

Despite this confirmation, Google’s status page indicates all its services are running smoothly. DownDetector also shows there are no signs of trouble over at Mountain View, so chances are the bug is only affecting a small fraction of people (but still big enough for its Twitter reps to address it).

Read next: The AI community's reaction to Microsoft's $1BN 'investment' in OpenAI is priceless