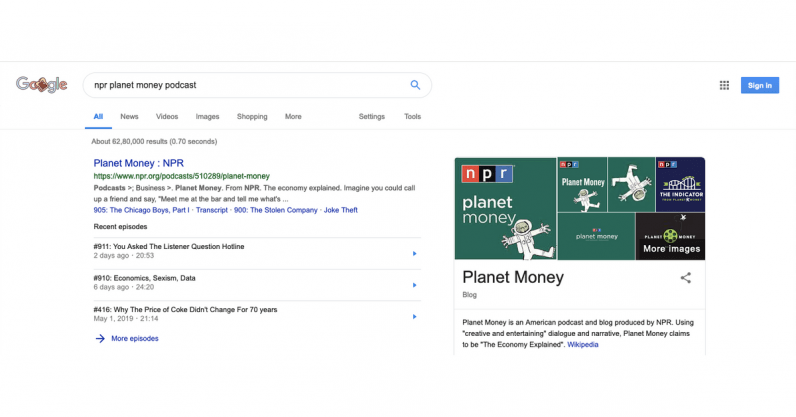 At I/O 2019, Google announced that it will start including podcasts in search results so that you can listen to them right away without the need for a standalone podcast app. The feature, as of today, has gone live across both desktop and mobile web.

Searching for a relevant podcast now surfaces a card of the most recent three episodes. The podcasts can be played right there by clicking the ‘play’ button. But tapping on the links will take you to podcasts.google.com, offering a feed of all the episodes.

Selecting ‘play’ will bring up a basic audio player, with controls to play/pause, rewind 10 seconds/forward 30 seconds, and adjust playback speed.

The new Podcasts experience can be achieved without signing in to your Google account, but logging in lets you sync your playback status across all your devices. However, there is no dedicated page to view all your subscriptions, unlike the Podcasts app made available for Android since last June. The only way to access your subscribed podcasts, for the time being, is through the Google search bar.

The feature will also benefit iOS users and those who use Google Assistant from the platform, as Google is yet to launch a Podcasts app for iOS.

Google originally incorporated podcasts into its music streaming service Google Play Music back in 2016. It even had a barebones podcast player for Android as early as 2009 in the form of Google Listen, an experimental app which it shut down three years later.

“We launched Google Listen through Google Labs in August 2009, to give people a way to discover and listen to podcasts. However, with Google Play, people now have access to a wider variety of podcast apps, so we’ve discontinued Listen,” it wrote then in a blog post.

Google Podcasts is thus the company’s third stab at a podcasting service. Of course product flip-flops and constant shutdowns are nothing new for Google, which has a habit of making two of everything and seeing what sticks with customers in the long run.

The search giant’s commitment problem aside, the rationale for the new app appears to be Google Assistant, which is increasingly being integrated into all of its core offerings, both on your phone and in your smart home devices.

Taken in that light, the new podcast app is only a cog in the Google Assistant wheel, meant to highlight its usefulness as a virtual assistant, but also exist as part of a larger attempt to keep you invested in the Google ecosystem.

Google, after all wants you to keep coming back to it, whether the search bar is present or not.

Read next: How to use AI to redefine the way we create art