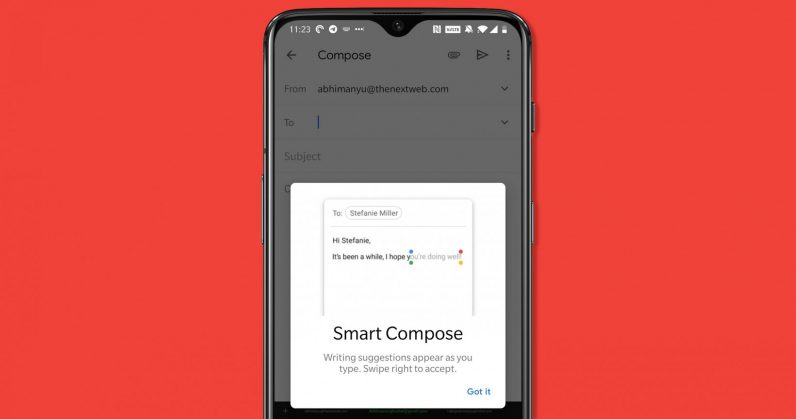 Gmail’s Smart Compose feature, which autosuggests words and phrases to help you write emails faster, has been around on desktop for a while now, as well as on Google Pixel 3 handsets since last October. It was supposed to be exclusive to that phone model, but it’s now becoming available on more devices, reports Android Police.

I’ve just spotted it on the OnePlus 6T I’m currently using, as well as a Poco F1 – you’ll need version. 9.2.3 of the Gmail app to get it. It’s turned on by default in this version and notifies you of its existence when you hit the Compose button; you can turn it off if you like. But why would you?

Smart Compose works like a charm: start typing a new message or a reply, and it’ll automatically suggest words to help complete your sentences. On mobile, you simply need to swipe right to accept a suggestion when it pops up as you type.

I’m always nervous about whether I’m being polite or clear enough in my emails, and that tends to slow me down. Smart Compose is generally on the money with its prompts, and it takes some of the anxiety out of my email triaging experience (since I don’t need to deliberate as much before I put words on the page), allowing me to get more stuff done in my inbox than before.

In my brief testing today, I found the feature a little less capable on Android than on desktop. While the web app gets to prompting right from the first salutation and isn’t afraid of suggesting recipients’ names, the Android version plays things a little safer and mostly helps you complete sentences. Hopefully this will improve over time.

I highly recommend giving this a go. Google hasn’t yet said which devices this feature will roll out to; we’ve written to ask and will update this post when we hear more. If the feature isn’t already available on your phone, grab the Gmail 9.2.3 installer from APKMirror and give it a try.