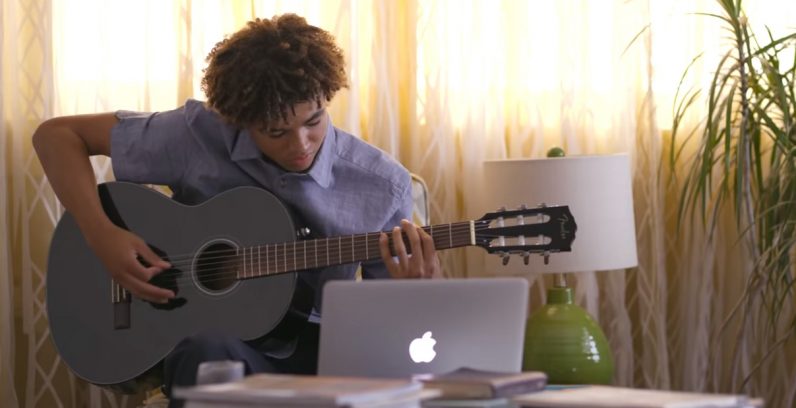 The very idea of traveling to a music store or inviting someone into my home to get one-on-one guitar lessons makes my stomach hurt. Like millions of other people, I live with social anxiety. Fender’s Play app is marketed as the next-best-thing to live tutoring, so I decided to see if it could help me.

First off, let’s be crystal clear: most experts agree the best way to learn guitar is from a tutor, preferably in-person. Paying a professional for lessons directly contributes to your local music community. More importantly for your education, it also means you’ve got someone there to help you break bad habits before they start.

However, if — for whatever reason — that’s not the best option for you, there’s nothing wrong with being a musical autodidact. And the Fender Play app makes it easier than any other solution I’ve tried.

The first thing Fender Play gets right is the interface. There’s plenty to do inside the app, and you’re always free to skip around and take lessons in whatever order you please, but it’s also very simple to just follow the “path” you select.

Your path includes your instrument and the style of your choice. The instrument options are:

And the style choices are:

These can be changed at any time. And there’s plenty of overlap between acoustic and electric guitar, but I didn’t find it to be a problem. I chose the acoustic guitar blues path – it goes well with my cheap acoustic guitar and taste for whiskey. It should go without saying you’ll need to provide your own instrument.

Rather than try and figure out what everything did all at once I just tapped “start” on the first lesson. A pleasant-sounding person in a well-lit room patiently explained what a guitar was. I moved on to the next lesson. Someone else explained a few more things about the guitar (those lines under the strings are called ‘frets’ y’all). And then someone showed me how to tune my guitar. I just downloaded Fender’s free Tune app and used that. Eventually a different smiling person asked me to play my first note on my guitar and strum along with him. My journey of personal discovery and tasty licks began.

This is pretty much the Fender Play experience. You watch videos while you play guitar. There’s no gamification here, so it doesn’t matter if you actually play along or not – nobody is keeping score. But, rather than learn a system you can buck, your challenge is to sound as good as the people on your screen.

The lessons begin slowly. A smiling woman on the screen, at one point, says “This is a whole note. I want you to strum once every four beats. I’ll count you in, ready?” and when she counts there’s a good three “Mississippis” in-between each number. Oh my god it’s so slow.

But, things pick up quickly. A few lessons later and, after losing track of how many fingers I have on my left hand (seriously, only five? Whose idea was that?), I watch as some dude grins devilishly at me before saying “Soon, you’ll be able to pull off more complex combinations,” before weedly-deedlying up an Eddie Van Halen-esque solo to end the video.

I, too, want to make magic sounds with my hands. The stranger on my screen has inspired me to try the next lesson. Before long, I’m playing the riff from “Train Kept Rolling.” I’m a blues guitarist now: hand me a smart hat and I’ll play you a sad song.

Fender Play works across Android, iOS, and most browsers. That means you can pick up where you left off across your devices and computers. It’s quite cool to take guitar lessons on your phone while strumming along outside under a tree – but the app didn’t seem to work without an internet connection, so beware if you’re on a limited data plan.

The elephant in the room is that, essentially, you could learn to play guitar for free by watching YouTube videos and tutorials. Fender Play has a 14-day free trial, afterwards it’s $9.99 per month. I’ll just come right out and say it: seems expensive. As a consumer, I’m delighted by the idea of learning guitar in just seven minutes a day… but I’m also concerned I won’t get my 10 bucks-worth if I don’t soak up as many lessons as possible. This is a weird place you’ve put me in, Fender.

Let me demystify the situation: it’s still worth it, I think. The congruous nature of the lessons, the obvious expertise of Fender‘s teachers, and the absolutely perfect videography (you’ve always got a clear angle of your teacher’s hands as they finger and strum the guitar, often zoomed-in and split-screen) make it a no-brainer.

Plus there are hundreds of included, well-known songs you can learn and play along to. I’m currently learning “Ain’t No Sunshine” by Bill Withers. I also like that all the information I need is always on the screen, and the teachers are warm and cheerful without becoming obnoxious or distracting from your lesson.

I highly recommend this app to anyone who’s ever wanted to learn to play guitar, but always had an excuse not to. Playing an instrument is great for your mental health, technology like the Fender Play app makes it easier than ever to learn, and we’ve even set up a short guide to help you pick the right instrument for you. There’s never been a better time to rock than right now.

Inspired by technology? Creating in the digital age? Check out our Art of Tech track at TNW 2019!

Read next: Hands-on: LG's G8 adds a palm-reading camera and face ID to the mix