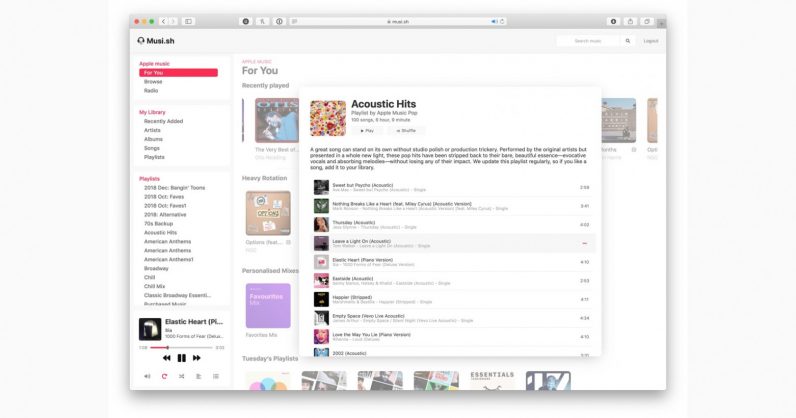 I use Apple Music as my primary streaming service, but it bums me out that it doesn’t have a web interface. So I have to rely either on my phone, or the dreaded iTunes app to play tunes. Thankfully, a new project called Musish fixes that by delivering the Apple Music web experience on my desktop, for free.

One of the core advantages of having a web app is that I can play music on my laptop without draining my phone’s battery, and access my library through a friend’s laptop too. Additionally, if you have a computer that you use exclusively for work, you don’t need to install iTunes to get your fix.

For the most part, the site echoes Apple Music’s design language and functions, so there’s no learning curve if you’re already used to the mobile app. Competitors Spotify and Google Play Music already offer an official web interface. So, this website is super useful for Apple Music subscribers who’re looking to access their favorite songs on the web.

The open-source project uses Apple’s MusicKit to create a simple but effective web interface for Apple Music. You can login to your Apple account and access your library and personalized recommendations. The team says that Musish doesn’t store any login data on its servers, and that the login method is completely safe.

One of the features I particularly like is that when you click on an album, you’ll see the songs in a floating window, allowing you to stay on the same page while you browse tracks.

Filip Grebowski, a developer on the project, told me that the team behind Musish – including Brychan Bennett-Odlum, Raphaël Vigée, James Jarvis – are all Apple music lovers and wanted a way to use the service without draining their phone batteries. They cooked up a prototype at a GitHub-sponsored hackathon in 12 hours, and won it with this project. He added that the team subsequently worked on it in their free time or on weekends to bring it to this stage.

You’ll find that most of the Apple music features are available straight away. However, the Radio feature isn’t available just now; developer Bennett-Odlum told me that MusicKit currently doesn’t support radio stations through Apple Music; the team hopes Apple will fix this in a near future build of the library.

You can try out the project here, and if you’re a developer and want to contribute to it, head to its GitHub page for more information.

Update: The earlier version of the article mistakenly referred to Musish as Music.sh. Also, we’ve added names of all people who worked on the project.

Read next: Huawei has a reasonable explanation for the disappearing Twitter photos