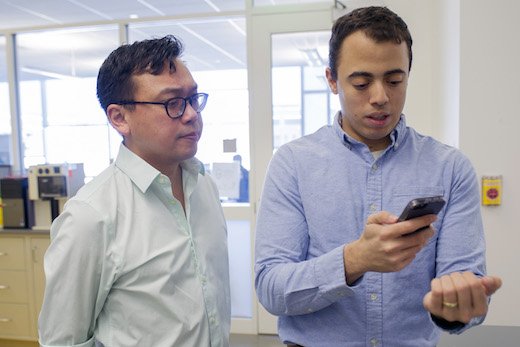 A new smartphone app can tell if you have anemia just by analyzing the color of your fingernail in a photo.

For instance, measurement of hemoglobin levels requires blood sampling by a trained phlebotomist, a clinical hematology analyzer along with an electrical power source, a set of biochemical reagents, and trained laboratory technicians to perform the analysis.

Now, thanks to a team of researchers from Georgia Tech and Emory University in Atlanta, USA, the disorder can be detected just using a smartphone app. The team relied on previous studies that proved anemia could be effectively detected by analyzing the pale appearance (pallor) of some parts of either the nails, palm or tongue. The authors noted in their paper published in the science journal Nature Communications:

Here, we leverage this observation that pallor is associated with anemia to develop a method that quantitatively analyzes pallor in patient-sourced photos using image analysis algorithms to enable a noninvasive, accurate quantitative smartphone app for detecting anemia

The app works based on an algorithm created by Wilbur Lam and his team at Emory University, and detects anemia by assessing the concentration of hemoglobin from the color of people’s fingernail beds, using photos taken on a smartphone.

The fingernail color is a good indicator of the blood’s hemoglobin levels because our nails don’t contain any dark pigment-producing cells that would mask the telling hue.

Once you take a photograph through the app, it uses the image metadata- automatically obtained from the smartphone camera – and normalizes for the background lighting conditions to accurately detect the actual paleness of your fingernail bed. The paper claims that this is a technique missed in all previous non-invasive methods to detect anemia.

A four-week study conducted with the app involving 337 people with a range of blood conditions, including 72 healthy control subjects revealed that the app outperformed physicians assessing hemoglobin levels from a physical exam.

The paper noted that the app-based method was not as good as a blood test, but as good as – or even better than – a number of FDA-approved diagnostic tools on the market today.

The researchers believe that the app should be used only for screening, and not for clinical diagnosis. But they added that with additional research, the app could provide the accuracy it needs to replace blood-based testing methods for clinically diagnosing anemia.

The researchers told Good News Network that their app can currently allow patients with chronic anemia to manage themselves better by allowing them to monitor their disease, and figure out when they needed therapies or blood transfusions.

We all probably know at least one person who is anemic, and it’s fairly easy to treat once it’s detected. It will be interesting to see how people benefit from this app once it is rolled out for users globally.

As AI and machine learning become more ubiquitous, we can only expect that smartphone based diagnosis will become more popular.

If you are interested in knowing more about this research, you can find the paper here.

Read next: Google reportedly personalizes search results even when you're in incognito mode