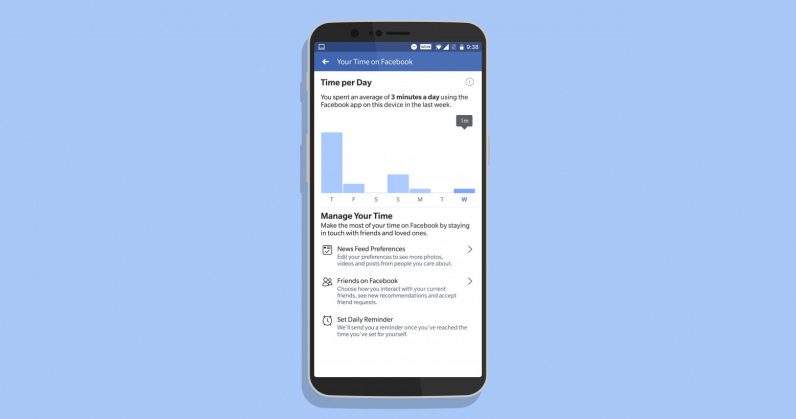 We first heard in June that Facebook was working on a feature to help you track and manage the amount of time you spent in its mobile app. Following a delay after the company announced its rollout in August, it’s finally here.

Like the new ‘Your Activity’ feature that was introduced in Instagram last week, the ‘Your Time on Facebook’ dashboard displays a graph showing you how much time you’ve spent on the social network’s app over the past week.

To access it, launch the app on your Android or iOS device, tap the hamburger icon on the top right corner, and scroll to the head to your Settings & Privacy section. Then, tap ‘Your time on Facebook.’ As you can see, I use the app for three minutes too many per day.

In addition, you can set a reminder to alert you after you’ve crossed a daily time limit that you specify. Here’s what the notification looks like:

You can also unfollow friends and Pages to cut your News Feed down to size. The interface for this function is well thought out, and simply requires you to tap on avatars to quickly unfollow them. That beats my usual method of weeding out friends selectively after judging their posts on my desktop.

That’s about as useful as it gets. There’s no breakdown of exactly where your time goes while you’re on Facebook (and when in the day), and no way to restrict access to specific portions of the social network that you’re addicted to, like photo albums or Groups. And the ‘Friends on Facebook’ section simply brings up a list of pending friend requests and suggestions; I don’t see how that would help you manage your time spent in the app.

If you’re keen on curbing the amount of time you waste on the social network, I’d recommend using the dashboard to first understand just how many minutes or hours you spend with it, and then look for a different – and healthier – activity to replace your cumulative Facebook breaks. You could, for example, go for a walk or a jog, play a sport, or practice playing a musical instrument.

If you find that you mostly use it at work or in other situations where you can’t leave your location to pursue some physical activity, consider meditating, reading books or learning new skills with your phone. As I’ve learned in my ongoing attempt to battle screen addiction, breaking new habits and building new ones take time, so you’ll need to make an effort to stick with both processes.

What are your top tips for cutting down on time spent on social networks, and what do you do instead? Let us know in the comments.

Read next: Google's Neighbourly app is rolling out across India now, and it's actually pretty neat