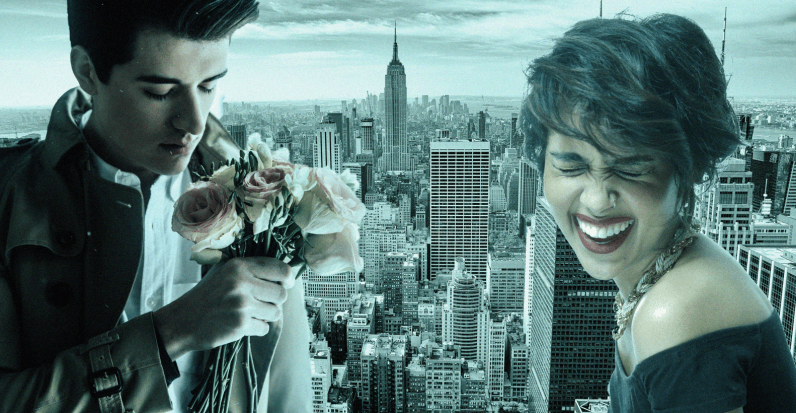 More than 150 men showed up to Union Square in Manhattan on Sunday, some with roses in hand or a gift for the mysterious Tinder match who’d ghosted them for weeks before luring each of them to this spot, at this time.

Natasha Aponte is real. Well, the woman is. The name, Tinder profile, and any inkling of a backstory the men were able to glean before agreeing to this impromptu meeting? That’s less clear.

What we do know is that the men, each a potential love connection, were targeted over a period of weeks — sometimes months. Each swiped right on a profile they believed belonged to a potential match. She, in turn, swiped right on them. Conversation was often lacking, and Aponte told many that she had a project at work taking up the bulk of her time, but that she’d get back to them in a couple of weeks.

Some, as you might imagine, presumed this would be the end of the encounter. But yesterday, something strange happened. Each received a message inviting them to meet at Union Square for what they believed would be a first date. She claimed to be finally free of her workload, and willing to meet “around 6 tomorrow” to see her friend DJing near Union Square. She encouraged each of her potential dates to meet her there, promising to grab drinks after and “see what happens.”

It was a date.

Or, it was a date by the loosest definition one might apply to the word. A cattle call might be more appropriate.

What the men didn’t know is that this “date” wasn’t so much a casual meet-up, as a Bachelor-esque competition to win the affection of one woman. It started, like many Tinder encounters do, as an exercise in narcissism, with Aponte “swiping left” on any of the men under 5 foot 10, named Jimmy (she disliked the name, apparently), or who had been dumped in their previous relationship. If a sort of digital-meets-physical version of The Bachelor was the bar, this even more vapid excuse for melodrama managed to fall well short.

“I can’t believe this girl did this to so many innocent men,” one commenter told the New York Times. “There were guys with flowers and letters, excited to meet her. Their faces were covered with sadness when she announced the truth.”

After weeding out the ineligible — some of which had traveled from as far as Oregon to meet her — Aponte then requested 30 push-ups, right there on the pavement. This was the Hunger Games, after all, and only the physically strong had any hopes of survival. Next was a race. Then, a 60 second opportunity to explain why they wanted to be with a woman who would so willingly humiliate the hundred-or-so men who chose to participate.

Based on the lack of meaningful conversation beforehand, we’re assuming these were completely wholesome reasons, like intelligence, or some unspoken connection.

We could stop there, but the truth in this case is actually far more interesting than the hoax itself. The DJ that played the event, Nick AM was bound by a nondisclosure agreement to keep silent about the stunt, but referred reporters to the mastermind behind the whole thing, Rob Bliss. Bliss, whose work you’ve probably seen even though you may not be familiar with the man behind it, said that he was involved with the stunt. He was also involved in a 2014 video showing a day in the life of a woman as she roamed the streets of New York City, and dealt with a near-constant barrage of catcalls and harassing comments. That video has now been viewed more than 47 million times.

As for the endgame here, no one knows. But, according to Bliss, we’ll find out later this week with a video explaining the “who/what/why/etc. and the story of everything that happened.”

Interestingly, the real-life dating competition does seem to closely mirror the online experience for many women. On apps like Tinder, or Ok Cupid, men often have to message dozens of women to receive a single response. Women, on the other hand, are basically drowning in choices. According to a piece in Elite Daily, some women have hundreds, even thousands, of matches on Tinder at any given time. In this last man standing, no holds barred approach to romance, maybe the real world competition isn’t that far removed from the digital one. Or, maybe these guys should just swipe left and move on.

Read next: SurfSafe offers a browser-based solution to fake news