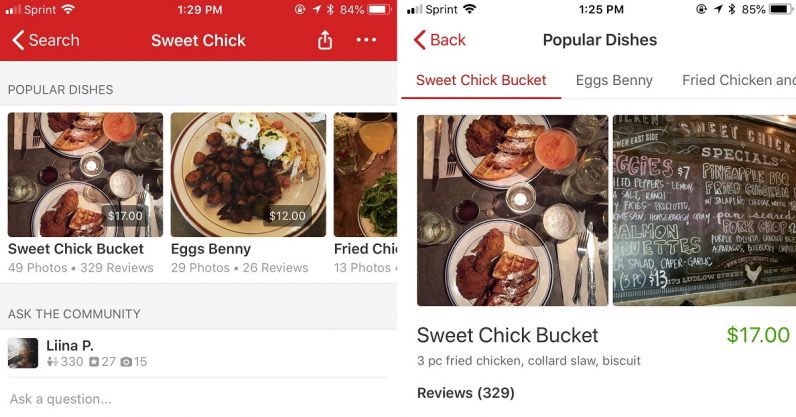 Yelp’s latest update will compile a list of Popular Dishes for each restaurant, using AI to figure out what everyone prefers to eat based on the restaurant’s reviews.

The details: Yelp is using machine learning to skim the reviews for each restaurant in its considerable catalog. Once it does, it determines the most popular dishes based on the number of times they’re mentioned.

You’ll see a list of Popular Dishes on each restaurant’s profile. Tapping on the list will bring you to a more detailed page with photos, price, and menu listing. For each dish, it shows relevant reviews mentioning the food’s quality, for good and for ill. According to a Yelp spokesperson, the reviews don’t currently take positive or negative associations with the food into account — it’s purely based on how many times they’re mentioned in the reviews.

Why it matters: The point of Popular Dishes is presumably to cut down on the number of patrons staring dead-eyed at the menu, trying to figure out what to order. It’s good that the Popular Dishes come from the reviews themselves, rather than the restaurant’s owners — while I don’t know how much I trust the taste buds of one over the other, I’ll generally try something if it’s got enough positive mentions and a mouth-watering picture or two.

Obviously, this is only going to matter to popular restaurants with lots of reviews. Your favorite hole-in-the-wall diner with a handful of reviews might not have enough information to create a Popular Dishes list. Also, the fact that a dish is included regardless of whether reviewers liked it or not just requires the user to do more research. If, for example, scampi is in the Popular Dishes list, but all the reviews say “Avoid the scampi at all costs,” then that’s only telling me what I shouldn’t order, rather than what I should.

Popular Dishes is available on iOS and Android starting today.

Read next: Digital sight will change the smart home forever