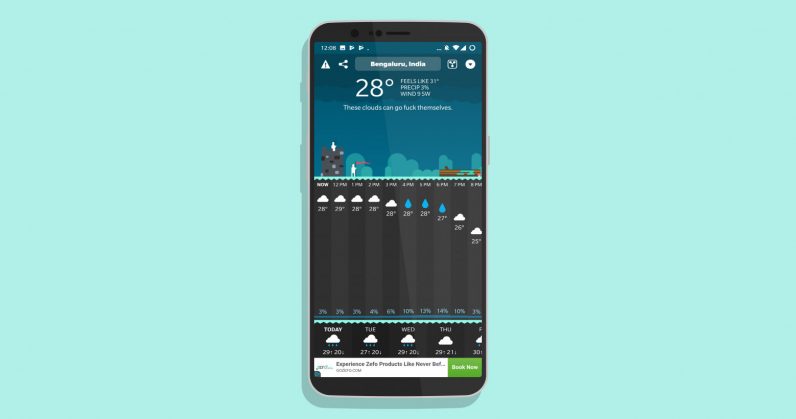 iOS developer Brian Mueller’s Carrot Weather app has won numerous awards and features in Apple’s App Store for making it fun to check the day’s forecasts. It’s finally made its way to Google Play so Android users can enjoy its hilarious approach to bringing you weather information.

Sure, you can see plenty of data at a glance, follow storms, and check forecasts for the several days ahead, just like most other such apps – but Carrot sets itself apart with ridiculous dialogue that insults you while telling you about the weather and guiding you through the interface.

It’s silly, but there’s something about hearing a robotic voice exclaim, “These clouds can go fuck themselves,” on a rainy day, that makes you feel like your weather app knows what’s up.

There are other little niceties like graphics that change along with the weather, and a simple little game that challenges you to find locations on a world map while poking fun at your lack of intelligence. Ponying up for the premium tier ($3.99 a year) unlocks a home screen widget and access to historical weather data dating back 70 years.

If you’re tired of plain vanilla cloud and sun icons in your default weather app, Carrot is worth a look. Grab the beta from Google Play.