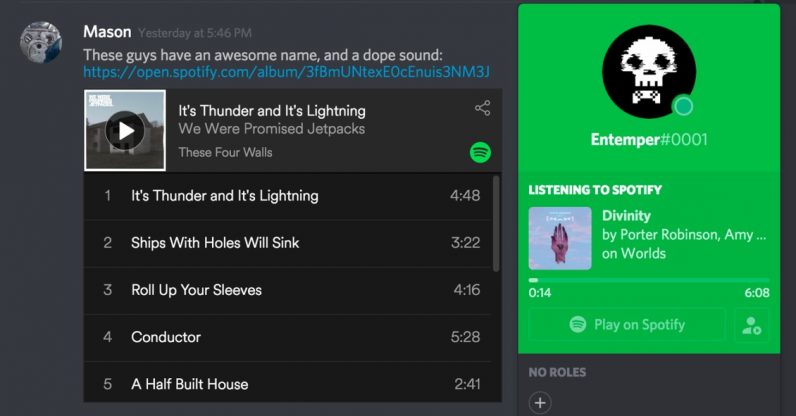 The latest service to throw its weight behind chat client Discord is Spotify, as the two services today announced they’re joining forces.

As part of the new partnership Discord users can link up with their Spotify accounts. Starting today, users who link the two accounts will display what they’re listening to in their profile. They can also invite other people in the server to enjoy the music as well with a Listen Along feature, provided they have a Spotify Premium account.

Jason Citron, Discord’s CEO, says “Spending time with friends around gaming has been the foundation on which Discord is built. Finding more ways for people to create those shared experiences is what makes this Spotify feature exciting for us.”

Supposedly, being able to see what everyone’s playing in their Discord profile will encourage users to discover new music and artists. Personally, I didn’t find it particularly revelatory when my Facebook friends were doing this in 2011, and I don’t that’ll change just because it’s now on Discord.

It seems like a bit of an extraneous addition to Discord, but usually, when I listen to something in a chat room, I have to use third-party websites to do it. If someone is more musical (or share-happy) than I am, this integration could be useful.