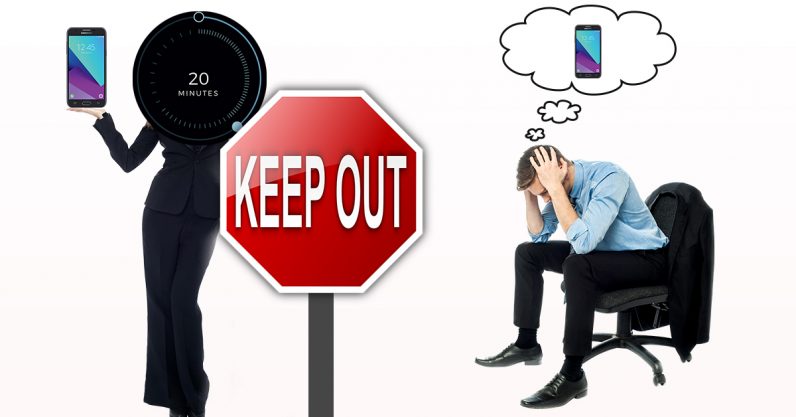 When I heard about Arianna Huffington’s new Thrive app for Samsung, available on Android, I thought what any rational person in control of their own lives would: this is stupid. Who needs an app that stops you from accessing your other apps?

After using it for a couple of days, however, I’m sad to say that I need this app. In fact, I think a lot of us do. Not everyone with a phone addiction is suffering from it, some of us think we’re doing just fine, thank you very much. Thrive changed my mind really quickly.

Arianna Huffington described what the consequences of device addiction are in an email to TNW:

They’re very real, and they’re increasing. We now have enough data to begin seeing what being always-on and hyper-connected is doing to us. And, as the science shows, the dangers are real: overexposure to technology damages our connections with ourselves and with others. And there’s an increasing amount of research showing even greater dangers for our children. It’s a challenge we’re going to have to deal with, and 2018 is going to be pivotal.

In order to review the app properly, I installed it on the phone I use for everything. And I decided to try and use it the way I imagined someone who needs it would. If this comes off as haughty, that’s because it was – which I lament. When I downloaded Thrive I was under the impression I’d be hating on it.

It’s incredibly simple and straightforward. It has “Thrive Mode” which blocks all notifications for a set amount of time. You can set up an auto-reply to let people know that it’s Arianna Huffington’s fault you’re not responding. And you can set up VIPs whose messages will come through no matter what.

Also featured in Thrive is app control and microsteps. The former lets you set daily limits on any of your apps that, upon being reached, block you from using them until 12 AM. And the latter is a set of “small, science-backed behavior changes you can incorporate into your daily life today for greater well-being.” They’re essentially fortune-cookie sized suggestions you can implement into your life to help you control habits.

If you’re too anxious to keep “thriving” you can cancel it, but if you’re really dedicated you can enter “Super Thrive Mode” which cuts you off from using apps — with the exception of emergency calls — until a specified time, and you can’t just back out of it. It’s almost unfathomable — who turns off their phone on purpose?

I actually wrote an article that stopped just short of asking people to avoid apps like this, because I was of the opinion that manners and self-discipline were all any of us really needed. I disliked the idea of setting scheduled times where email and messages were off-limits. It’s probably time for a healthy heaping of humble pie. But, the issue isn’t an easy one to tackle.

I’m a busy guy right? Don’t some of us have deadlines and work-emergencies that require us to be ready to respond even in our off hours? I can quit any time I want.

That’s a problem. Becoming better at compartmentalization isn’t a solution, I’ve since learned. Priorities are important but I think (for myself at least) the biggest problem is commitment. I don’t want to use my phone when I’m down on the floor playing with my toddler, but the blinking green LED could indicate something important. What’s a quick glance going to hurt?

Our US Editor, Bryan Clark, wrote about the problem in a different way:

When you lift your phone to check email, chances are your browsing doesn’t stop there. I might open my phone to check email, but once I’m done I almost always find myself on Twitter, Facebook, Snapchat, or Instagram. If you’re anything like me, you might start doing one thing on your smartphone, but an hour later you’re doing something else entirely, all under the guise of “checking email real quick.”

Fear of missing out (FOMO) anxiety is real, but I haven’t been acknowledging the power it has over me. It only took using Thrive twice to convince me I had a problem. After failing to make it to 10 minutes both times I realized I should probably re-think my phone useage.

Thrive is actually helping me do that, the simple act of pressing the “Begin” button is like a digital version of “admitting you have a problem,” which, as we all know, is the first step. It’s also good to know I’m not alone.

Huffington believes that many people, like myself, have the same problem:

What I would really like to see is a cultural shift. We envision the THRIVE App as more than just a product—it’s a lifestyle choice that harnesses the multiplier effects of our networks to help create new cultural norms about what we value. Through the THRIVE App, we can make technology work for us—and ensure that we value recharging and focusing just as much as we value staying updated and informed.

I’m not gonna lie; turning on “Thrive Mode” feels a little dorky. As a technology journalist it feels like a tiny betrayal to press a button that, basically, turns off the most important piece of technology in my life. But I’d rather feel a little dorky than miss out on my kid growing up.

Thrive is available on Android for free, you can download it on the Google Play store here.

Read next: DJI's new Mavic Air might've finally convinced me to get a drone