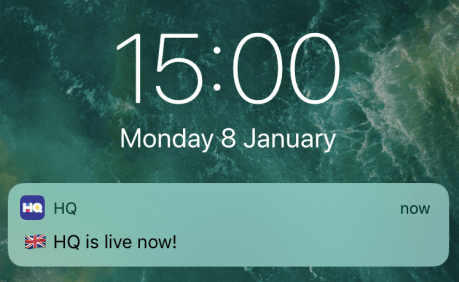 HQ is a viral sensation, and easily one of the most compelling iOS apps to have emerged in the tail end of last year. It lets hundreds of thousands of people compete for a cash prize by answering twelve trivia questions. These start easily, but quickly become fiendishly difficult.

The game was always available worldwide, but now HQ has its own UK version, featuring questions that pertain to British sport, media, politics, and culture. Expect to be asked about Jeremy Corbyn and cricket.

The prize pot for the first game was $500. Although this is significantly smaller than what’s offered in the main game, there’s much less competition. When I played, there were only about 5,000 other players.

In comparison, when Scott ‘Host Malone‘ Rogowsky is on our screens, you can expect to compete with over 500,000 people.

Speaking of Quiz Daddy, don’t expect to see him here. Instead, HQ’s UK export is hosted by one-time BET presenter Sharon Carpenter, who has previously worked as a fill-in for Rogowsky, and became a HQ regular in early December.

Unfortunately, the maiden voyage of the first ever edition of UK HQ Triva ended with no winners, with all players eliminated after the eleventh question.

And @hqtrivia’s brand new UK version is off to a solid start. pic.twitter.com/4Of502GMTw

Surprise #HQTrivia UK launch today. Nobody won anything because of this blinder at Q11 pic.twitter.com/EaKd9elS99

The UK version runs every Monday and Wednesday at 3PM and 9PM UK time. We’ve reached out to HQ for more details, and if I emerge unscathed with more details, I’ll let you know.

Read next: This pint-sized battle robot packs enough power to knock you out