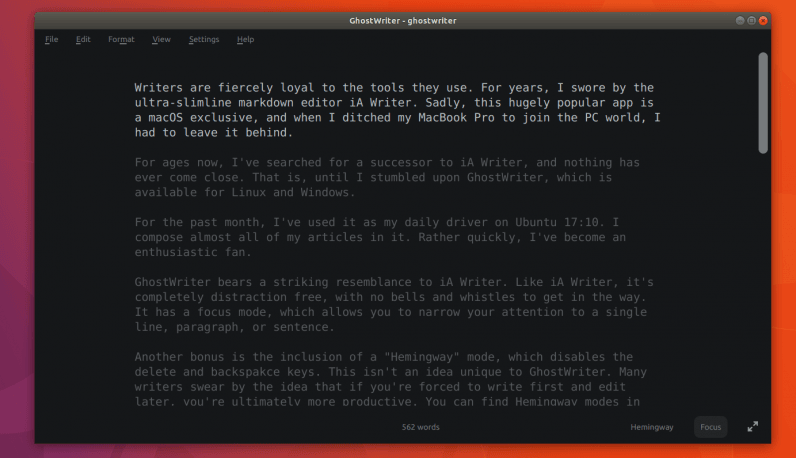 Writers are fiercely loyal to the tools they use. For years, I swore by the ultra-slimline markdown editor iA Writer. Sadly, this hugely popular app is a macOS exclusive, and when I ditched my MacBook Pro to join the PC world, I had to leave it behind.

For ages now, I’ve searched for a successor to iA Writer, and nothing has ever come close. That is, until I stumbled upon GhostWriter, which is available for Linux and Windows.

For the past month, I’ve used it as my daily driver on Ubuntu 17.10. I compose almost all of my articles in it. Rather quickly, I’ve become an enthusiastic fan.

GhostWriter bears a striking resemblance to iA Writer. Like iA Writer, it’s completely distraction free, with no bells and whistles to get in the way. It has a focus mode, which allows you to narrow your attention to a single line, paragraph, or sentence.

Another bonus is the inclusion of a “Hemingway” mode, which disables the delete and backspace keys. This isn’t an idea unique to GhostWriter. Many writers swear by the idea that if you’re forced to write first and edit later, you’re ultimately more productive. You can find Hemingway modes in several other text editors, but GhostWriter is the first one where I’ve actually used it.

Right at the bottom of the page is a word count, letting you see how far along you are into your oeuvre. Like iA Writer, GhostWriter also comes with an eye-saving night mode.

It’s reasonably customizable too. In addition to the usual visual tweaks, you can set the text width and change the font.

I’m a fickle person, and I flit between text editors a lot. Despite that, I feel pretty comfortable with GhostWriter, and I expect to use it for the foreseeable future.

That said, there are a few areas where GhostWriter leaves a lot to be desired. Its focus mode — which is designed to keep you focused at the task at hand — isn’t nearly as good as iA Writer. GhostWriter simply emphasizes the piece of text you’re working on, while iA Writer places it smack-bang in the middle of the screen, where it’s at eye-level.

I’m not sure if this is just a flaw with the Linux version of the app, but it also doesn’t really scale well on higher-resolution screens. My primary display is a 2K monitor, and both text and icons are really small.

The easiest workaround I found was to lower the resolution of my display to 1920×1080. Still, that’s not exactly ideal, is it?

I’ve tried other distraction-free Linux markdown editors. I know UberWriter has fans, but when I used it, it didn’t really set my world on fire. .

I also spent November trying out Write, which has an enthusiastic fan in my colleague Abhimanyu. I liked it, but felt as though document management could be a little better, and it was a little too turbo-charged for my liking. It also didn’t properly scale on my monitor, which was frustrating considering it costs nearly $20.

Of course, if a Linux port of iA Writer ever came out, I’d probably throw great wads of cash at the screen, before promptly making it my default text editor. But until that day comes, I’m sticking with GhostWriter.

If you’ve got a recommendation for a distraction-free text editor I should try, feel free to drop me an email here.