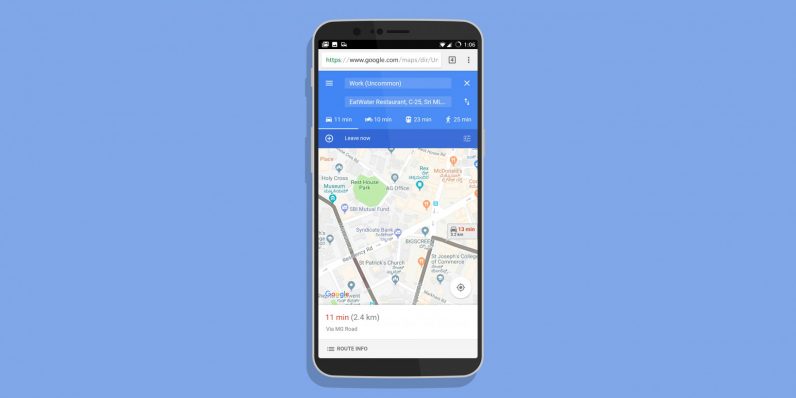 Earlier this month, Google announced the official rollout of Android Go, a variant of its mobile platform that’s optimized to run on devices with less RAM and processing power. Part of that offering included similarly optimized Google apps – including Maps Go.

Android Police noted that the app now has a listing on Google Play, but it looks like it’s only going to be compatible with Go phones (which are actually slated to arrive in the coming months). However, it’s also listed in the PWA Directory as a progressive web app, and so you can try it by simply firing up your phone’s browser.

Copy this link and paste it into a new tab on your mobile browser (tapping it will likely just fire up the standard Maps app), and you’ll find a light version of Google Maps ready to go. As with the service’s other apps, you can look up destinations and find info like closing times, get directions on a map, and see routes, travel times (with support for two-wheeler mode), and live traffic info – but you won’t get turn-by-turn navigation.

Right now, it’ll likely only come in handy for people on older phones or for those who don’t have room for many apps on their devices.

It’ll be interesting to see what Google’s done with its other apps for the Go platform – YouTube and Google Search already have Go versions (there’s also Files Go, a file management tool), while Gmail, Assistant, the Play Store, Chrome, and Gboard are set to get lightweight variants as well.