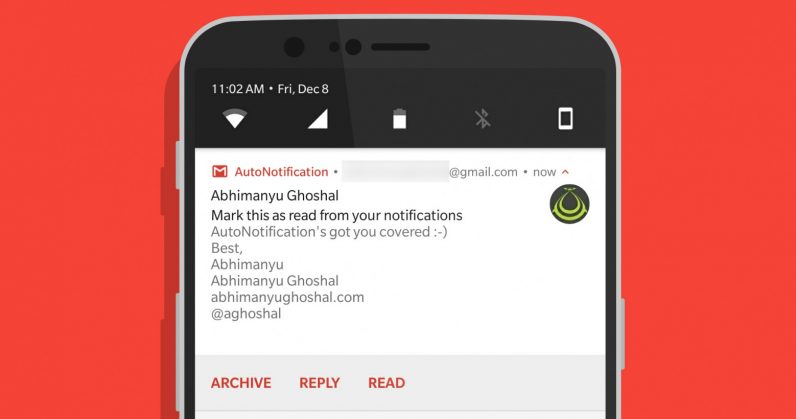 Here’s an app you hopefully won’t need for long: AutoNotification lets you mark Gmail messages as read – without archiving them – straight from the Android notifications panel.

That’s handy, because it’s often easy enough to scan an entire email right from an alert. Gmail’s Android app presently only lets you archive or reply to messages from the notification panel – neither of which may be useful to you for certain messages – so this app intercepts those alerts and displays a custom notification with the ‘read’ button on board. It works with multiple Gmail accounts, and you can add as many or as few of them as you like.

It’s worth noting that this feature isn’t free: you can try it as part of a seven-day trial at no cost, but after that, you’ll need to pony up for either just this standalone functionality, or the whole raft of AutoNotification capabilities. In India, the Gmail feature cost me Rs. 75 ($1.16).

AutoNotification also does lets you create custom notifications with additional buttons in other apps, add more Quick Settings Tiles on Android 7.0 and above, reply automatically to chats in various messaging apps (though you can also try Can’t Talk), and integrates with Tasker to automate some of these functions.

While I’m glad to have found an app to tackle my emails better, it’d be nice to see Google take a hint and bake this right into the next version of Gmail’s Android app. Doesn’t look that hard, does it?

Find AutoNotification over on Google Play.

Read next: How luxury brands can close the experience gap online