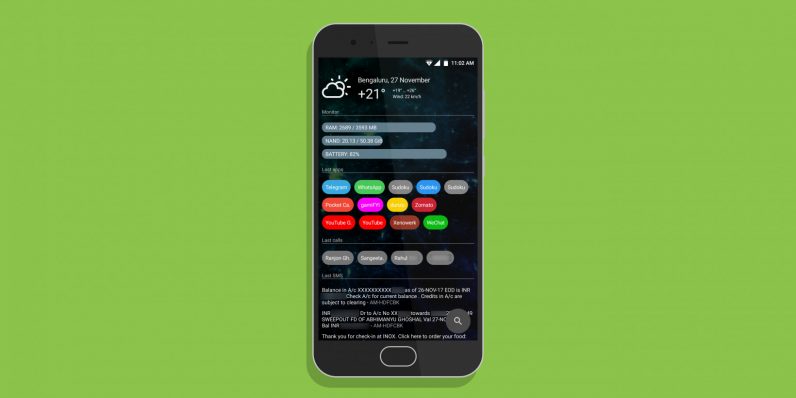 As a longtime Android user, I’m partial to Nova Launcher for its flexibility, allowing me to customize my home screen and app drawer just the way I like – minimal and clutter-free (see below).

If that looks like a nightmare to you, you might want to check out AIO Launcher, an interesting new alternative that puts ALL the information and shortcuts you could ever need on a single scrollable screen.

The free app, developed by Evgeny Zobnin, features a simple text-heavy design with multiple sections containing everything from your last accessed apps and contacts, system information, texts, news, Twitter feed, calendar appointments, and even the current Bitcoin exchange rate in a customizable homescreen.

There aren’t any app icons: just tags for the ones you used last, and an alphabetical list of all your apps that you can drag out by swiping from the left edge of the screen. A search button at the bottom left lets you look up contacts, apps and the web in one place.

It’s certainly not for me, but it’s an interesting approach for those who don’t enjoy fiddling with icons to navigate their device’s interface, and who’d prefer to see as much information in a single screen as possible.

That said, AIO launcher still needs a lot of the work: I’d like to be able to decide what happens when I tap on a search result, customize the typography on the homescreen, add widgets from other apps, and so on. It’s also still a bit buggy: the search button once disappeared on me for a long while, and I can’t figure out how I got it to return later.

If that sounds like your cup of tea, give it a go by grabbing AIO launcher from Google Play.

Read next: My screen addiction is getting so bad that I'm willing to try this fake phone